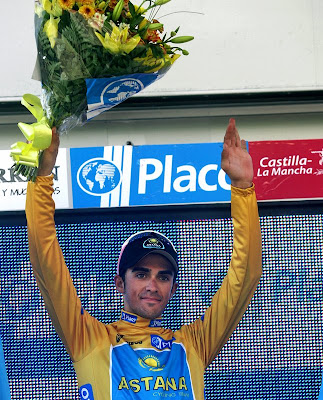 Alberto Contador put his stamp on the Vuelta a España on Saturday with an impressive attack up the famous Alto de L'Angliru. The Angliru, with its steepest pitch of 23.5%, brought the showdown battle everyone had hoped for. There was no hiding and it was every man for himself.

Contador had set his eyes on the Angliru prize even before the Vuelta. "This was the stage that I had dreamed about the most. I think it is the most mythical mountain in all of the Spanish races."

To conquer the Angliru's torturous grades, Contador (which translates as 'the accountant') meticulously planned his winning ride. "Fortunately I could do the climb in training beforehand, so I knew it fairly well."

No amount of knowledge could make the climb any easier, Contador confessed. "The Angliru is very hard. It is a very impressive climb, with very steep grades." The Spaniard's fluid riding style belied the difficulty of the ascent, and he rode out of the saddle and away from his competitors, making the climb almost look easy.

The throng of fans who came up on foot or on bicycles probably knew the reality. Many had to get off their bicycles at the steeper sections. Even some of the cars by the organisation that were trying to make it up to the finish had a hard time.

"I really have to applaud Leipheimer today. His work was impressive. He is a great professional."

-Alberto Contador acknowledge the sacrifice of his American teammate.

This toughness of the climb and the good weather brought an unprecedented number of people to the mountain, making it resemble a Spanish Alpe d'Huez.

Contador noticed the massive amount of people along the way. "I am very happy with the atmosphere on the climb today. It was very important for cycling, for the Vuelta and above all for Spanish cycling. It was a great spectacle. Cycling isn't dead yet!"

Noting that frequent ascents like this could also hurt him some day, he quickly added that it shouldn't be overdone. "We don't want this kind of climb in every race, but once in a while it is OK, to give fans a spectacle."

Cycling is a team sport, and Contador's Astana squad provided him the perfect springboard for victory on stage 13. First it was Andreas Klöden who drove the pace all the way until the final climb. Then Jose Luis 'Chechu' Rubiera took over. Finally, it was Levi Leipheimer who put in an impressive spell at the front, staying with his captain until the final five kilometres.

It was the latter rider that Contador especially singled out. "I really have to applaud Leipheimer today. His work was impressive. He is a great professional."

But Contador also made clear that he didn't expect anything else. "The things were clear. Johan Bruyneel and the rest of the sports management had decided I was going to be the leader." Indeed, Bruyneel confirmed this fact a few days before stage 13 to Cyclingnews. With no more flat time trial to come, Astana did well to put all its money on Contador, even though Leipheimer had shown he could hold his own on an uphill finish.

It will be interesting to see which of the two can do better in the mountain time trial on the next to last day. If the Giro's Plan de Corones madness is anything to go by, Contador should be ahead. Both riders went unprepared into the Giro, not knowing that Astana was eligible to ride until a week before the race.

Besides his teammates, Contador had also kind words for the rider who was deemed to be one of his biggest rivals up to the Angliru, Igor Antón (Euskaltel-Euskadi). "That Igor Antón crashed out is a real shame. He is a very young and impressive rider." Antón crashed after the treacherous descent of the Alto de Cordal was already done and over with. The peloton was going through the town of Fresnedo, the location of the last sprint of the day.

Contador couldn't do much but state the obvious. "Unfortunately that is bike racing. You have to pick yourself up and continue." Following his own advice, Contador is now looking ahead and he sees a bright future at the 2008 Vuelta. "It is true I gained a lot of time today, but the race isn't over. I have a lot of respect for my rivals."

But then Contador was informed of the actual time gaps to his rivals: Carlos Sastre (CSC-Saxo Bank) at 3:01, Ezequiel Mosquera (Xacobeo Galicia) at 4:19 and Alejandro Valverde (Caisse d'Epargne) at 4:40. The Astana captain is most closely followed by teammate Leipheimer, who is 67 seconds behind.

Contador rephrased his previous statement slightly. "Yes, the time gaps are pretty big. I think if I don't have a bad day – and I believe I have everything well under control – that I am the best right now. If my body doesn't fail me, things should go smoothly."
Posted by Recovox at 9:28 AM