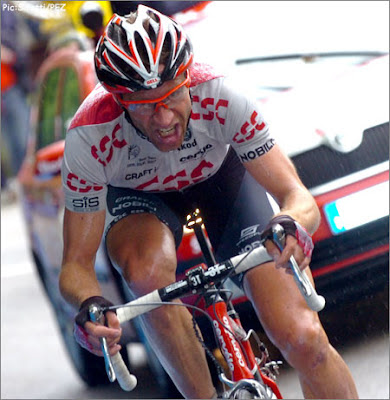 One of the hardest men in modern day cycling, Jens Voigt, has taken his first-ever Giro d'Italia stage win by escaping solo with 36 kilometres remaining in stage 18 – 147 kilometres, ending with two 17.4-kilometres circuits on the parcours to be used for the 2008 World Championships. The 36 year-old gave Team CSC its first win at the 2008 race when he finished more than a minute ahead of Italians Giovanni Visconti (Quick Step), Rinaldo Nocentini (AG2R La Mondiale) and Gabriele Bosisio (LPR Brakes), all of whom were part of an original 12-man escape that went free around 10 kilometres from the race start in Mendrisio.

Spain's Alberto Contador passed another day in the race leader's maglia rosa. His Astana team helped control the race that was held over mostly wet roads travelling from Switzerland to in Italy's Lombardia region. He finished with the main gruppo at 7'50".