Contador Sits 5 seconds Out Of First At Giro 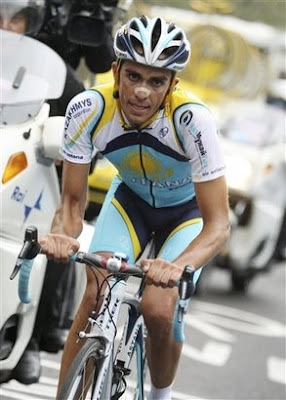 There was a big fight among the nervous GC riders, but no one was able to impose their will on the race.

Contador wasn’t his sharpest when two-time Giro champ Gilberto Simoni (Diquigiovanni-Androni) attacked with about 3km to go to blow up a group of about 20 leading GC favorites.

Just as Astana sport director Sean Yates predicted, it was a free-for-all among the GC favorites, but the stage didn’t turn out the way Astana hoped. Contador, Andreas Klöden and Levi Leipheimer were all dropped as Simoni, Franco Pellizotti (Liquigas) and finally Denis Menchov (Rabobank) made lethal accelerations.

“I was the first to attack. We were a bunch of sheep today, not a pack of lions. Everyone was too scared to attack,” said Simoni, who finished ninth and slotted into ninth overall at 1:31 back. “I tried first, but in the end it was Menchov who pulled clear. That was a surprise, but this Giro is just beginning.”

Next were Pellizotti and Riccardo Riccò (Saunier Duval-Scott) at 8:57, Simoni at 9:01 with defending champion Danilo Di Luca (LPR) coming across in 13th at 9:14 back.

“It was an extremely difficult stage and everyone was at their maximum. Contador fell back, but he’s still the favorite for victory,” said Di Luca, who slotted into 5th at 1:07 back. “We now have the maglia rosa. I lost a little time, but this was the first mountain stage and this Giro is long. Tomorrow is another hard stage and it will tell us a lot.”

Leipheimer finished 34th at 13:08 back while Klöden was 17th at 9:57 back in a hard day for Astana. Contador was not happy with the outcome.

"I didn't have the day I was hoping for," he said. "I've been struggling with allergies and it really affected me today. The legs couldn't respond as they normally would have. To be five seconds from the maglia rosa is disappointing. I'm not happy with how things went at all."

Riccò settled into fourth overall at 1:02 off the pace. A winner of two stages so far, Riccò made headlines overnight by claiming he was going to “attack the beach boy and the Kraut,” referring to Contador and Klöden, but woke up with a cough.

“This morning I didn’t feel that great and I had some problems breathing the way I wanted to,” said Riccò. “Like I said before, the mountains at the Giro aren’t the same as in the Tour. The gradients are much steeper and you have to manage your forces better. I gave my most, but I hope to be feeling better for tomorrow’s stage.”

The 91st Giro continues with Sunday’s six-climb, 153km 15th stage ending atop the Marmolada. The fireworks have just begun.