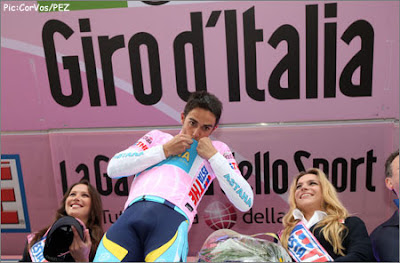 Alberto Contador of Team Astana is proving to be a worthy holder of the Giro d'Italia's race leader's maglia rosa, holding the favourites in check today on the 238-kilometre stage from Legnano to Monte Pora. The 25 year-old Spaniard managed the gap gained by Italy's Danilo Di Luca (LPR Brakes) thanks to a lethal attack on the descent of the Passo del Vivione. Over the following 55 kilometres to the finish, the 2007 winner held the virtual race lead, but Contador closed the gap back down to 1'46" to keep the upper hand.

Italy's Riccardo Riccò (Saunier Duval-Scott) tried his own attack on the finale up Monte Pora, distancing Contador to move closer to the race overall lead, gaining 37 seconds. Contador now holds the lead by four seconds to Riccò and 25 seconds to Di Luca.

"The team worked very well, they deserved a ten," said an exhausted Contador. "Compliments to Riccò and Di Luca, they have made this Giro very interesting. I will continue to say what I said yesterday, I will not be afraid of anyone. I came here to do one week, I have kept the maglia rosa and I am not going to obsess over Di Luca or Riccò."

Belarus's Vasil Kiryienka took his biggest professional win to date. The 26 year-old of Tinkoff Credit Systems attacked from the day's escape seven-man group at the base of the Passo della Presolana to finish solo with 4'36" over Di Luca.

"I said before the Giro that I would try three times and today was the third time," Kiryienka explained. "Thanks to my team, my DSs. I am very satisfied."