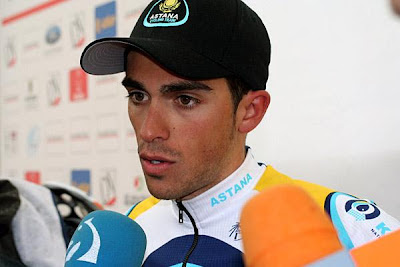 After the surprising invitation of Astana for the Giro d'Italia (May 10-June 1), Spaniard Alberto Contador was very happy, but at the same time a bit afraid. "It's a joy for everybody, but for me it's sort of a challenge. As we were not invited before, many things of my preparation changed. I like to contend every race in which I participate, but now my competition form is a bit of an unknown," stated the 25 year-old in a newsletter.

"In order to prepare my Giro debut properly, I would have liked to know much earlier that I would participate in this race," added the winner of last year's Tour de France. He did a great Vuelta a Castilla y León and an excellent Vuelta al País Vasco, which he was both able to win. Afterwards, a dental infection stopped his training for one week.

The next race in his schedule originally was the Dauphiné Libéré (June 8-15), so that at the moment, he only trained easily, with rest days in between. "When they announced that I would ride the Giro, I was on holidays. The Giro wasn't in my programme and due to this, I am not in top form. But I will give my best," promised Contador, who still has to take a look at the parcours and profiles of the mountain stages.

"The Giro is an extraordinary race for a climber, as the list of its winners shows. I feel a big respect for this race and for this reason, I would have liked to prepare it well," he added.
Posted by Recovox at 8:40 AM