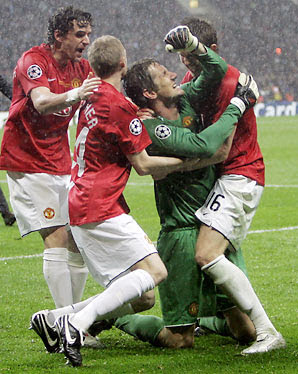 John Terry ran up to the ball, with Chelsea needing only a successful penalty kick to win its first European Champions League title. The Blues captain slipped on the wet turf of Luzhniki Stadium and his shot glanced off a post Terry fell to the ground and bent over, his head between his knees, and Manchester United goalkeeper Edwin Van der Sar raised his arms in triumph. A few moments later, Van der Sar was celebrating again, batting away Frenchman Nicolas Anelka's drive to give United its third European title.

"If it wasn't for the slip by John Terry, it would have been all over," Van der Sar said after Manchester United beat Chelsea 6-5 in a rain-soaked penalty shootout Wednesday following a 1-1 tie. "It's our luck that he slipped."

This championship, following titles in 1968 and 1999, came in the 50th anniversary year of the plane crash that killed eight United players in Munich, Germany. Fourteen penalty kicks were needed to decide the first final between two English teams.
"I think it is fate," said the Red Devils' Ryan Giggs, who made his club-record 759th appearance to break the record he shared with Bobby Charlton -- one of the plane crash survivors.

In a testy match that saw eight yellow cards, the ejection of Chelsea's Didier Drogba and a broken nose for United's Paul Scholes, Cristiano Ronaldo scored his 42nd goal of the season with a header in the 26th minute off a Wes Brown pass.
Chelsea tied it in the 45th when Michael Essien's shot hit defenders Nemanja Vidic and Rio Ferdinand, and the ball dropped to an unmarked Frank Lampard, who scored from 12 yards. He pointed both hands skyward in honor of his mother, who died April 24.

Ronaldo, considered by many Europe's top player this season, made the first key miss in the shootout when he slowed his approach and was stopped by goalkeeper Petr Cech on United's third kick. "When we missed the penalty kick, we thought we were in trouble," said United's Alex Ferguson, who led the club to its 22nd title overall since he became manager in September 1986.

Terry stepped up with the score 4-4 and Van der Sar dived right. The shot went left but hit the post.

"John is Mr. Chelsea. He's Chelsea through and through," Lampard said. "He wants this more than anyone."
Anderson and Giggs then converted for United around Salomon Kalou's score for Chelsea. That left it up to Anelka and -- sacre bleu! -- Van der Sar correctly dived to his right. At just past 1:30 a.m., the save set off another celebration for the Red Devils, who 10 days earlier won their second straight English Premier League title by beating out Chelsea on the final day of the season.

While his teammates ran to congratulate Van der Sar in front of the United fans behind the goal, Ronaldo lay face down in the center circle. Eventually he got up to join in the celebrations. "That's the first penalty shootout I've ever won," Ferguson said. "I lost three with Aberdeen and three with United, so it's seventh-time lucky." Terry was in tears at the end and was hugged and consoled by coach Avram Grant, who appeared to throw his runners-up medal toward Chelsea fans. "We hit the bar, we hit a post, we were the stronger team for sure," Lampard said.

Chelsea, which has become a European power under high-spending Russian owner Roman Abramovich, finished with 10 men after Drogba was ejected in the 116th minute for petulantly tapping Vidic in the face with his hand. Lampard hit the crossbar in the fourth minute of injury time with a left-footed shot from 15 yards. Giggs nearly broke the tie in the 100th but Terry deflected the shot with his head. "I feel very proud for lads," Ronaldo said. "This is everything for me. It's a magnificent season for me."
Posted by Recovox at 6:32 PM