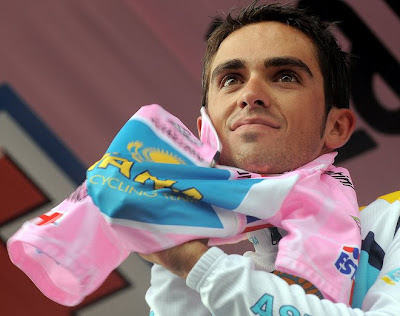 Spain's Alberto Contador has moved one step closer to winning the 91st Giro d'Italia's overall classification by defending his slim lead on the race's penultimate day – 224 kilometres of racing over the Passo di Gavia and Passo del Mortirolo to finish in Tirano. The 25 year-old of Astana controlled attacks by Riccardo Riccò (Saunier Duval-Scott) on the Mortirolo, while 2007 race winner Danilo Di Luca (LPR Brakes) fell out of third place overall.

Emanuele Sella (CSF Group Navigare) stomped away at the base of the day's final climb, Aprica. The 27 year-old Italian held off the chase of Gilberto Simoni (Diquigiovanni) to top the climb solo and finish, 16 kilometres later, in Tirano. Spaniard Joaquím Rodríguez (Caisse d'Epargne) escaped from the race leader group of Contador to collect third and the remaining bonification seconds on offer.

"I am without words," Sella stated. "Again my team showed well. The emotions are so high for me. I think that today I did something grande."

Riccò led Contador's group home for fourth and stayed second in the overall classification, four seconds behind Contador. Tomorrow is the final day with a 28.5-kilometre time trial to Milano.

"I will go and preview the course tomorrow," explained Contador. "I want to win the maglia rosa and it would be nice to also win the stage. However, the first objective is the jersey."
Posted by Recovox at 11:08 AM