Tereza Hurikova Rides Into The Olympics 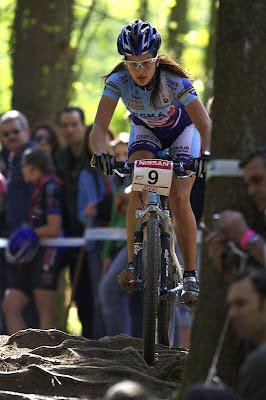 In the second World Cup race Tereza reserved herself a ticket to the Olympic Games in Beijing. After finishing in 9th place in Houffalize, she once again showed that she is in a great form this year and in Offenburg passed the finish line 11th. Her rival in this mini Olympic match, Kateřina Nash, was not able to compete with Tereza due to her knee injury. As Katka confessed herself: “I’m not in an ideal form, I will cross my fingers for Tereza.“ Although Tereza’s nomination to the Olympics is now definite, she still doesn’t accept the fact. “Of course that I am very happy, but the race in Madrid is still ahead of us, so I will celebrate the Olympics once all the nomination races are over,” said Tereza.

At the start there was some nervousness showing on Tereza, but already during the first lap she managed to be riding with the top ten, moving around 7th to 9th place. In the last round, when she was losing strength, two more women passed her. She finished in a wonderful 11th place and once again stood on the podium during the ceremony for the U23 category and is now ranked in 10th place of the MTB World Cup series. “Right after the start I fell back, it was horrible, but I managed to gain back my position real soon and at the end of the first round I was riding around sixth and seventh place. I didn’t want to push it too much, because I knew that the race will last more than two hours. I was riding at a nice pace suited for me, although now I probably don’t look like it,” said Tereza. Tereza didn’t gain only a bronze medal in Offenburg, but most importantly a ticket with her name to Beijing. She will be the only Czech women rider starting at the Olympics. Two best race results out of three are taken into account for the nomination and Kateřina Nash will not be able to change the score anymore in Madrid, even if she would win. Katka finished in 24th place in Houffalize and 26th in Offenburg.
Posted by Recovox at 7:04 AM

May I suggest a link related to the Beijing 2008 Olympic Games?

Please let me know if you want a link back.
Many thanks for your reply.