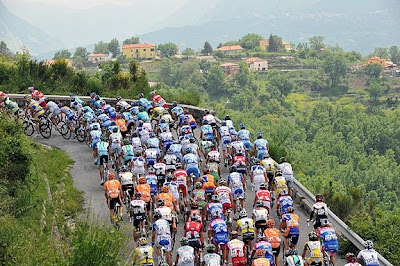 Riders are at their wits’ end with the seemingly endless string of transfers, delays and hassles associated with the opening days of the 91st Giro d’Italia.

In the first three stages of racing on Sicily, there were no less than 500km of transfers, nearly as much as the peloton has raced.

Tensions came to a head following the botched ferry transfer across the Straits of Messina from Sicily to Italy on Monday evening, when what should have been a 20-minute ferry ride turned into a four-hour odyssey.

“At the Tour, they shut down the roads when the riders need to make a long transfer,” Tour de France champ Alberto Contador told MARCA. “We’ve been stuck in traffic here for hours. We didn’t get to our hotels until 11 p.m. and hardly had time to eat and get a massage.”

Fed-up riders nearly protested ahead of the start of Tuesday’s fourth stage, but decided to bite the bullet and race. But they took their time about getting down to business, and the opening two hours of racing were at a snail’s pace of 37kph.

Slipstream-Chipotle has had its fair share of hassles associated with the chaos that is the Giro.

Following its victory in the team time trial Saturday, the team bus got lost in the maze of streets in Palermo. After nearly two hours of combating traffic, someone realized that their prizes included a Garmin GPS device. David Millar opened up the package and punched in the team’s hotel and they were home in no time.

The start of stage three from Catania to Milazzo was delayed for 15 minutes because the team bus was snarled in traffic and couldn’t arrive to the sign in.

Riders spoke again ahead of Wednesday’s stage and demanded that Thursday’s long stage be shortened.

“We spoke with Robbie (McEwen) and (Danilo) Di Luca before the stage and everyone agreed that we demand that the longest stage be shortened,” said race leader Franco Pellizotti (Liquigas). “The stage will still be the longest at 230km instead of 265km.”

The complaints didn’t fall on deaf ears. Race organizers agreed to shorten Thursday’s stage, the Giro’s longest, by 33km to appease the irritable peloton. The 265km stage from Potenza to Peschici will be reduced to 231.6km by eliminating a final loop and will conclude on the first passage at the line. It will still be the longest stage of this year’s Giro.

But there’s still more suffering on tap, and not just on the bike. The peloton faces three more long transfers over the next four stages going into the first rest day Monday.
Posted by Recovox at 5:22 PM