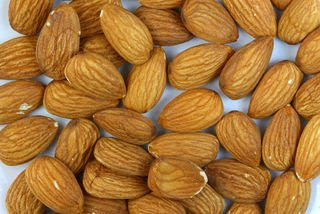 We’ve known for quite some time that a peanut isn’t really a nut (it’s a legume), but turns out almonds have long been sneaking in to the mixed nuts too! In fact, almonds are nothing more than a seed for an almond tree, a medium sized tree that produces flowers and almond fruit.

But that’s not where the trickery ends: Although similar in that they have an oval shape, off-white flesh, thin, brown-hued skin, there are in fact two kinds of almonds: Sweet, which are the ones we eat, and bitter, which are used to make almond oil or Amaretto but are otherwise inedible. For our purposes today, we’re only going to be talking about the raw, edible kind.

Perhaps one of the earliest convenience foods, the almond has gotten honorable mentions in many historical texts, including the Bible, and were previously referred to as the “Greek nut” in reference to what was thought to be the nut’s – uh, seed’s – birthplace. Today, almonds are cultivated in many of the countries that border the Mediterranean Sea including Spain, Italy, Portugal and Morocco, as well as in California.

But why should you be eating them? Almonds are a good source of supplementary protein, providing 7.62 grams of protein per quarter cup serving, compared to just 5.5 grams for the average egg. In addition, they are an excellent source of manganese, potassium, copper and vitamin E and also provide a hefty dose of heart healthy monounsaturated fats. In fact, ounce for ounce, you could say that almonds are a real health nut!

In terms of specific health benefits, it has been suggested by several large studies that almonds can reduce cardiovascular risk. In an analysis of four large prospective studies on the health benefits of almonds, researchers determined that eating nuts at least 4 times a week reduced coronary heart disease risk by as much as 37%. In addition, each additional serving of nuts was associated with an estimated 8.3% reduction in coronary heart disease risk. Research suggests that the almond’s protective heart benefits stem from its combination of powerful antioxidant flavonoids, the majority of which are concentrated in the almond’s skin.

Studies also suggest that regular almond consumption can reduce the risk of developing gall stones and may even help stave off weight gain.

So now we have you hooked, its time to stock up! Almonds are available at just about every grocery store and convenience store – heck, you can even find them in gas stations – either still in their shell or with the shell removed. Shelled almonds are available whole, sliced or slivered, with or without skin. For maximum health benefits, opt for those that have the skin intact (do it for the antioxidants!) If purchasing almonds in the shell, look for those that are intact with no splits, tears, dents or other signs of trauma. In terms of shelled almonds, those that are hermetically sealed will last the longest, but be sure to check the ingredients list – even if an almond is listed as dry roasted, it can sometimes contain added sugar and preservatives.

In terms of uses, almonds are perhaps one of the more versatile nuts. For breakfast, they can be used to add crunch and flavor to plain yogurt or can be ground up to add extra protein to a protein shake. In addition, they are delicious when sprinkled over cooked leafy green vegetables, added to stir-frys, or used to texturize a simple chicken salad. Also, consider using finely ground almonds as almond flour. It can be used in some recipes in place of traditional wheat flour.
Posted by Recovox at 9:13 AM