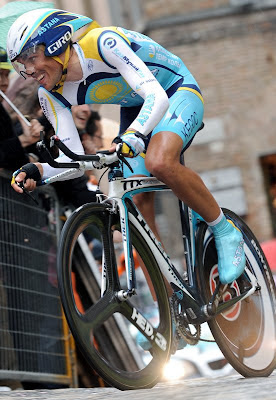 Lampre’s Marzio Bruseghin won the tenth stage of the Giro d’Italia on Tuesday, blasting through a 39.4km individual time trial route from Pesaro to Urbino.

Contador, who is suffering from a minor fracture of his elbow, finished eight seconds slower than Bruseghin, which was better than his Astana teammate Andreas Klöden who was third, 20 seconds adrift.

The specialist climbers managed to avoid too much damage in terms of losing time as Italian Gilberto Simoni lost less than a minute and his compatriot and already two-time stage winner Riccardo Ricco less than two minutes, even, though he fell during the stage.

Defending Giro champion Danilo Di Luca is over two minutes behind Contador, who is looking to the Giro as some form of consolation for not being able to defend his Tour de France title.

For Bruseghin it was his second ever stage win in the race, a year after winning another time-trial at the Giro.

Wednesday's 11th stage is a 199km ride from Urbania to Cesena with several climbs on roads that the late Marco Pantani used for training.