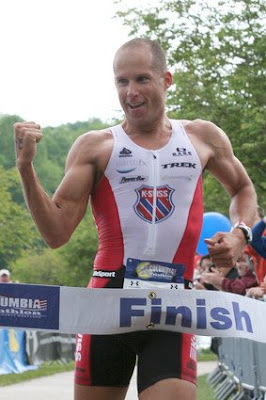 Two-thirds of the way through yesterday's Silver Columbia Triathlon at Centennial Park in Ellicott City, Chris Lieto found himself in familiar territory. Having made up considerable ground during the bicycle portion of the race, Lieto now had a different, albeit more desirable, problem to contend with.

"When you're in the lead, you don't know what's going on behind you," said Lieto, who was in first place going into the final leg based on his outstanding performance on the bike. "You're not running scared, but you don't get any input, either."

Fortunately for Lieto, he didn't need much input, because in the end the 36-year-old had enough output to not only capture the overall title but also break the course record. His time of 1 hour, 51 minutes, 13 seconds broke the mark of 1:51:46 set by U.S. Olympic qualifier Matt Reed in 2006. Reed did not participate in this year's event.

"I didn't know I was on a record pace until I came down the stretch and saw the clock," said Lieto, of Danville, Calif., who won for the second time this season after a victory in Miami in April. "At that point, I made sure I gave a pretty good effort at the end."

With race conditions described by several contestants as nearly perfect, the event consisted of a 1.5-kilometer swim, a 41-kilometer bike ride and a 10-kilometer run. It featured 24 professional competitors as well as more than 2,000 amateurs. Race organizers estimated the crowd to be about 7,500.

The outcome was decided on the bicycle course.

Lieto, considered one of the strongest cyclists in the sport, was not among the leaders after the swim portion. Neither was 2007 Ironman world champion Chris McCormack, who began the race as the odds-on favorite to win. While Lieto was busy catching and eventually passing those in front of him during the hilly parts of the bike course, McCormack and two other riders lost valuable time after some confusion with a race coordinator led them to veer off course. McCormack would recover and finish third with a time of 1:57:22 but afterward was clearly thinking about what could have been.

"It's disappointing," said McCormack, Triathlete magazine's 2007 Athlete of the Year. "I really wanted to win, and I was definitely in a position to do that but ... these things happen."

McCormack's troubles opened the door for 18-year-old Andrew Yoder to finish in second place at 1:54:31, improving his time from last year - a junior record - by more than five minutes. Since he turned professional midseason last year, his time does not qualify for the junior level. Still, the person some were calling the future of the sport was thrilled not only with his improvement over the past year but also to be sandwiched between two of the sport's elite.

"I hung with Chris Lieto and finished in front of Chris McCormack. ... It was awesome."
Posted by Recovox at 8:18 AM