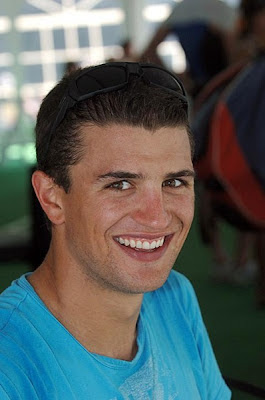 Terenzo Bozzone, the 23-year-old New Zealand prodigy who made a big splash in the sport when he smashed the course record with a sensational 3:53:43 at Wildflower two years ago, is starting a new chapter in his career at the inaugural Ironman 70.3 Boise.

“I’m dedicating everything I do this year to racing to my potential to the Ironman 70.3 world championship in Clearwater,” says Bozzone. “So Boise will be my first race to prepare myself to get back to the world-class performance I’ll need to make my mark in long-course at the end of the year.”

Coming off a disappointing quest to make the 2008 New Zealand Olympic team, Bozzone says Boise will be his first of a trio of Ironman 70.3 races, followed by Kansas and Eagleman.

Bozzone sees Danville, California, star Chris Lieto as the man to beat in the cool swim, hilly and windy bike and fast, flat run at Boise. “The swim is cold, so I think I’ll leave my brain in a bag by my bike so I won’t get brain freeze,” he jokes. “I’ll probably need it on the bike, which will be hilly and windy - but most of all because Chris Lieto will be racing. He will be very tough competition.”

As far as staying near last year’s sixth-place finisher at Ironman Hawaii, Bozzone says he has done extensive preparation to return to his 2006 form when he blew away the field at Wildflower with a 2:16 bike. “I want to stay close enough to Chris to do some damage. I got a pretty good idea what to do when I managed to get in a wind tunnel a few weeks ago and tested different aero positions. Theoretically, I could have a 15 watt improvement - the difference could be huge. But you never know till you get on the road. How long can I hold it? And will it be comfortable enough that I can run hard after 90 kilometers on the bike?”

As for staying near his rival, Bozzone thinks of Lieto as gold standard on the bike, somewhat akin to the sentiment expressed in the ballad "New York, New York.”

“Lieto? If you can ride with him, you can ride with anyone. Maybe I can’t do it this weekend. But I will try to keep the gap as little as possible - close enough to chase him down on the run.” Indeed, if Bozzone saves something for the run, he has immense potential. In that epic Wildflower win in 2006, he ran a still-standing 1:11:57 half-marathon.

Bozzone comes into Boise quite motivated after coming up short in his Olympic bid.

After two ITU Olympic distance Junior World Championships in 2002 and 2003, and satisfying a budding affinity for the half Ironman distance in 2005 through 2007, Bozzone decided to return to short-course glory and try to fulfill his Olympic dreams for 2008.

With his enormous talent and youth came big ups and big downs. At last year’s ITU world championship in Hamburg, Bozzone lived up to his great potential and took seventh overall, top New Zealander, two places ahead of 2004 ITU world champion and Olympic silver medalist Bevan Docherty. Unfortunately, the race that counted for New Zealand Olympic selection was the Beijing ITU World Cup two weeks later. There, Bozzone crashed on the bike and straggled in 55th while fellow Kiwis Docherty and Kris Gemmell finished third and fourth, respectively, and sewed up the first two slots for Beijing.

Nonetheless, New England selectors opted for Shane Reed’s consistency over the brilliance of youth - and it hit Bozzone hard.

“At the time I was pretty ripped up,” says Bozzone. “It felt like I’d been squashed into nothing. Nothing bad to say about Shane. He is a great athlete and it would have been great if all four of us were on the team. But I thought I was next in line and my performance at Mooloolaba was ahead of Shane. I just felt there was no proper explanation why I didn’t make the team.”

Bozzone admits he has been inconsistent - alternately great and completely off. “I do occasionally have world class performances, but my body is not completely mature and occasionally I struggle. That’s why so far I haven’t had the race I’m capable of at Clearwater (where he finished sixth and ninth in his first two Ironman 70.3 world championships). I’ve ridden a little harder than I should and I’ve paid for it the last quarter of the run. I need to figure out my limits and how hared I can push the bike and the run.”

While he’s been just short of glory recently, Bozzone’s successes have lifted him above the early days when he’d sleep overnight in airports - sometimes in the janitor’s office. “Those days were definitely character-building. But I’m not sleeping by the side of the street recently. But you never know, if I keep racing the way I am…”

Bozzone, with his good looks and engaging personality and limitless potential, has made major sponsors Specialized, Saucony and Plumbing World in New Zealand, plus minor sponsors Oakley, Profile Design, and blueseventy wetsuits very happy and won’t be facing a lodging crisis any time soon.

And given his history, Lieto should beware the motivated Bozzone this weekend.

When asked what sparked his paradigm breaking course record at age 21 in Wildflower, the unfailingly polite and considerate Bozzone hesitated for a moment. “I don’t exactly know how to say this,” he says. “But the year before someone said a few things to me that made me mad. When I got back to Wildflower, I felt I had something to prove.”

Coming off his Olympic disappointment, Bozzone has rekindled those feelings. Perhaps that will be enough to overcome a shortage of the training he did two years ago at Wildflower. But whatever the result this weekend, Terenzo Bozzone is on a mission.
Posted by Recovox at 8:37 PM