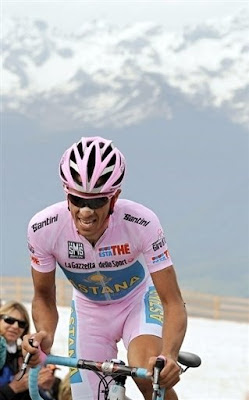 Astana's Alberto Contador held onto the pink leader's jersey with a solid 40:48, good enough for fourth on the day.

"I gave everything in the last section of the race," Pellizotti said, while waiting for the final riders to finish to find out if his time would hold. "I was disappointed with my performance yesterday, but I don't know if it's fast enough."

Contador, the last to start, had a 33-second GC advantage over second-placed Riccardo Ricco (Saunier Duval). He padded his overall lead of Ricco by about 8 seconds.

Emanuele Sella (CSF Group Navigare), who won the previous two stages in the mountains but was still tenth on GC coming into the time trial, finished in a time of 40.32 for second place for the day.

The 12.9km climb averages 8.4 percent and has portions near the top with 24 percent grades. Check back soon for a complete report and results and Graham Watson photos.