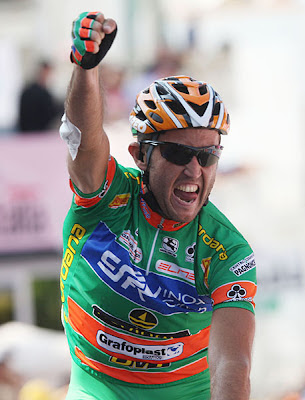 Aaah, we haven’t had one of these for a while! A Grand Tour peloton turns a blind eye as a monster escape screams up the road and rewrites the general classification. Somewhere, Claudio Chiapucci is smiling ….. as a younger Italian hero lives the dream.

Swapping the tricolore of national champion for the fabled maglia rosa tonight is 25-year old Giovanni Visconti, hand-picked for QuickStep by none other than ‘Il Grillo’ himself. Paolo Bettini had been watching the youngster from his early days on Domina Vacanze and personally saw to it that he became a team-mate.

And now Visconti’s racing future is secure as he pulls on one of the sport’s most beautiful jerseys. Maybe he was inspired by the race start in his Sicilian homeland, but the youngster was smart enough to keep tabs on Matthias Russ of Gerolsteiner, who was lying closest to him overall. By picking up the bonus sprint with 90kms to go, and a handful of seconds advantage over the finish line, he did enough to edge into the pink jersey.

And he gets the narcissistic pleasure of reading about himself all over the Italian sports pages in the start village tomorrow!

Visconti was one of a dozen in a breakaway group, joined by the USA’s Jason McCartney (CSC), Big Magnus Backstedt of Slipstream, Astana’s Maxim Iglinsky, Alan Perez of Euskaltel, Daniele Nardello from Simoni’s team (to save on the typing!) ….. and, for a while at least, the unfortunate Rene Mandri. Ag2r’s Estonian crashed out of the action and out of the race with an unscheduled visit to the floor.

Today’s racing situation was no doubt helped by the organisers wisely deciding to slice off the 34-km finishing circuit before a pissed-off peloton sliced something off the organisers. After some tortuous transfers already, the Giro bosses recognised the “… stresses and unease …” (classic PR speak) of the riders and gave them a break.

So instead of a stage the length of a Classic race, we had a bloody long and undulating stage anyway, but hopefully an extra hour’s recovery tonight. And we also have to eliminate ‘Circuito del Gargano’ from the stage title!

In the main field, Liquigas were quite happy to let the lead go to another team, and with no-one of major concern in the break, it was allowed to stretch out to 16 minutes. They were hammering it all the way, too, with the first three hours being particularly balls-out – 47.4 km/h!

55 kms from home and Visconti, Nardello and CSF Navigare’s Matteo Priamo tried to escape from their buddies but were quickly back in the fold. Priamo had ants in his pants because he was next to try something serious and it stuck.

10 kms from the line, and he jumped again. When Visconti looked over for some help, Alan Perez roared up to Priamo and they were ……… goooone. McCartney and then Backstedt did all they could to haul things together, but the nasty final gradient hampered the chase.

Priamo nailed Perez to the floor in the sprint – a bit slo-mo after 230kms – and scored the best win of his career. The shattered breakaway arrived like the survivors of some long walk to freedom, all over the road. The peloton trundled in well over 11 minutes later.

Check in at Pezcycling.com for daily updates on the Giro
Posted by Recovox at 8:41 AM