Plan de Corones too much for frayed peloton 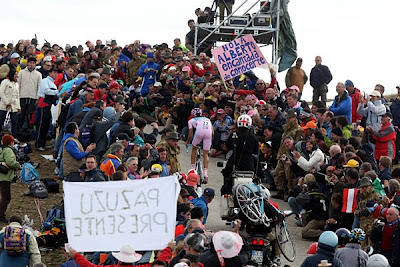 Frayed nerves that were already threadbare after two torturous weeks at the 91st Giro d’Italia spilled over Monday in the 12.9km mountaintop time trial up gravel roads to Plan de Corones.

While it made for great TV and proved popular with the tens of thousands of fans who trekked up the summit, it proved to be another source of irritation in an already exasperated, race-weary peloton.

“This race is just insane!” said Slipstream’s David Millar as he climbed into a cable car to take him down the mountain. “Taken individually it’s a good idea, but on a total, it’s not a good thing after the two mental days we’ve just had and the two hard weeks we’ve had before that. This race is just ridiculous.”

That sentiment was near universal among the peloton. Riders are fed up from a combination of long transfers, grueling stages, nasty weather, traffic jams and foul-ups that started when riders missed ferries while leaving Sicily in the first weekend.

Riders were exasperated after spending two hours in team buses following Sunday’s stage only to face a four-hour transfer Tuesday morning for the final rest day.

Jens Voigt (CSC) didn’t hold back when queried about whether the time trial was too much following back-to-back summit finishes across the Dolomites that included eight rated climbs.

“It’s a stupid race - I don’t like it! We are at a ski area! Leave it to the mountain bikers!” said an angry Voigt. “I don't want to sound like an old grand-mother, because I know cycling is hard. But this Giro is too much. It’s like a machine that missing some oil and needs a tune-up. With a few small details, it would be so sweet. But today, for 45 minutes of racing, I have to miss an entire day. And tomorrow is four-hour transfer. Where is the time for recovery?”

Others complained about the difficulty of this year’s Giro that everyone agrees has been one of the hardest in years. After a very difficult opening weekend in Sicily, the middle part of the Giro has been loaded up with hilly and medium climbs that made for great, unpredictable racing, but many say was simply too hard before the climb-heavy final week.

“They want us to ride clean? After this Giro ends, I am going to give a present of a bicycle to (Angelo) Zomegnan and tell him to ride this Giro and make all the transfers that they’ve put us through,” said an annoyed Enrico Gasparotto (Barloworld). “This Giro is too hard. Last year, I worked my ass off for Di Luca, but now I am even more tired as a protected rider. Every day has climbs, summit finishes, small roads, crashes, nerves. Even if there is one flat section, they would take us through a small village with tiny roads or make us climb a wall just to make for a good show.”

“Cycling needs spectacle like this to lift it out of mediocrity. Look around us, there are not mountains like this anywhere in the world. What do (the riders) want? Every day, this Giro has had huge crowds along the road, on the finish, big audiences on TV,” Zomegnan said. “This is the Giro, if they don’t like it, they can race somewhere else.”

Whether or not the entire peloton approved, there was no arguing that the setting of Saturday’s stage was nothing short of spectacular.

Huge crowds were shuttled up to the mountaintop finish line in comfort thanks to a network of ski lifts and cable cars that zipped them up the 1,089-meter climb. Tents selling hot German sausages and cold beers were waiting at the top.

Unfortunately for the riders, there was only one way up. The hard way.

Starting in the quaint ski village at San Vigilio di Marrebe, the first half of the course was up a steep, paved section to the top of the Passo Furcia. That’s where the 2006 road stage ended when heavy rain forced the cancellation of the Plan de Corones debut. The paved section climbs nearly 500 vertical meters with ramps as steep as 16 percent, and that was the easy part.

The “sterrato” takes over from there. Just over 5km long, the narrow forest road winds to the top of the Plan de Corones (Kronplatz in German), a stand-alone peak serving up spectacular, 360-degree views of the towering Dolomites of Sud Tirol.

The steepest bits are at the bottom and top, with ramps as steep as 20 percent and 24 percent, respectively. The gravel section stair-cased up nearly 600 vertical feet for one tough day at the office.

“That last kilometer is just brutal,” said Ryder Hesjedal (Slipstream-Chipotle), an ex-mountain biker who rode a 38x27. “I’m a little more used to the loose gravel than some of these guys. I just got up it the best I could. If it was raining, it would have just been a slaughter.”

Road conditions were better than expected. Local organizers packed in extra loads of gravel and used a special machine to compress the service road. Drainage was pretty good on the road, with only a few sections with puddles.

Luckily for everyone, the weather held up. High clouds blotted out the sun, but the gravel was mostly dry and held up after bike after bike sliced through the gravel.

Team cars weren’t allowed to go up the road, so riders were followed by mechanics on the back of motorbikes. Each rider had one trailing mechanic, who carried spares wheels.

The final 20 riders had two trailing motorbikes, one with a mechanic with two wheels and a second with another mechanic carrying a spare bike.

Also, if a rider has so many mechanical problems that they cannot finish the race within the time limit, they will receive the time of the last-place rider.

“The conditions of the course don’t allow us to properly support our riders, so is it fair to everyone? I saw motorbikes slipping out,” Caisse d’Epargne sport director Neil Stephens said. “What happens if Contador’s bike breaks and he can’t ride his spare? Maybe stages like this are too much. It should be fair for everyone.”

After everyone crossed the line, they descended by chairlift back down the mountain. From there, team cars shuttled them back to waiting team buses. Tomorrow? Another transfer of 275km on the final rest day.

The final verdict on Plan de Corones: It was just another day at the Giro d’Italia.
Posted by Recovox at 9:04 PM

If the French start thinking the same way as the Italians in July, we're going to have more stressed out riders. The Pro life sure is a difficult one.