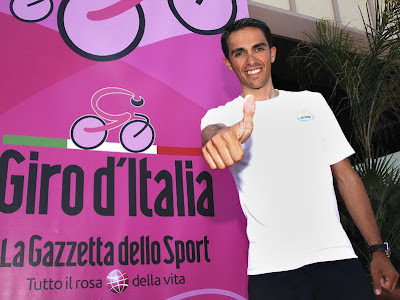 Spaniard Alberto Contador admitted he will be looking to fine tune his form in the coming weeks if he is to become a real contender for the Giro d'Italia crown.

Contador was among the pre-race favourites for the Giro's pink jersey who were counting their comparative losses after the opening stage on Saturday - a team time trial won by American debutants Slipstream.

Contador, last year's Tour de France winner, was on holiday relaxing on the beach when he and his Astana team were stunned in midweek with a late invite to the three-week race. Already admitting he lacked full fitness for the rigours of the race, the Spaniard's appraisal of his form changed little after his Astana team finished the 23.6km race against the clock 29secs behind Slipstream.

"On my heart rate monitor I could see my pulse going a little bit high - a sign that in fitness terms I'm not at my best," said the Spaniard. "I hope things will start to improve as of tomorrow. Today the team rode a conservative race to avoid crashing. Seventh place is not too bad."

The race for the pink jersey is not yet on although some of the pre-race favourites will have noted the performances of their rivals. Defending champion Danilo Di Luca of LPR, who has tipped Contador to succeed him, was happy with a team performance which keeps him well in sight of his main pink jersey rivals.

"We set down a good time, so I'm happy," said Di Luca, whose team finished just one second ahead of Astana but 23secs ahead of the Diquigiovanni team of two-time Giro winner Gilberto Simoni.

Simoni was satisfied with a performance which he said has kept him within sight of Contador. "What counts is the gap to the favourites for the general classification," said Simoni. "We're 22secs behind Astana, which is okay. I'm satisfied."

Another Italian being tipped for pink jersey success is Riccardo Ricco, who rides for Saunier Duval. After trailing in 15th place at over 30secs behind Contador and Di Luca, Ricco was less than happy with his team's performance - but he is waiting for when the road start to rise before coming to any conclusions.

"Personally I'm feeling good form at the moment and in a few days, after the first climbs, we'll see what my chances are going to be like," he said.

After making the 23.6 km race against the clock one of their big objectives, Slipstream went out and hit an average speed of just over 53 km/h to come home with five of their nine riders in a winning time of 26min 32sec.

Vandevelde meanwhile becomes the first American to pull on the race leader's pink jersey since Andy Hampsten claimed overall victory 20 years ago. After they lost Scottish time trial specialist David Millar in the finale, Vandevelde was first of his team's remaining five riders over the finish line and admitted it was the biggest win of his career.

"First of all this is a team win, so we'll be celebrating that tonight. It's unbelievable. It's the biggest win of my career," said the American.

"We came here with this time trial in mind and we were all super concentrated on the race. "We hadn't decided who was going to cross the line first."

Slipstream were launched only last year but thanks to their claim to have a staunch anti-doping stance they have been invited to this year's Tour de France.

Sunday's second stage takes the peloton from Cefalu to Agrigento, in Sicily, for an undulating 207km race which finishes with a four-kilometre climb to the finish.
Posted by Recovox at 2:12 PM

Earning money online never been this easy and transparent. You would find great tips on how to make that dream amount every month. So go ahead and click here for more details and open floodgates to your online income. All the best.