How Close, How Far? 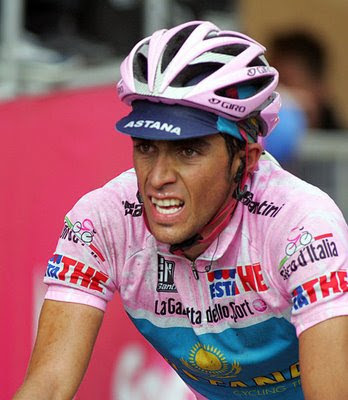 Phew…this Giro is going to be too close to call if today’s racing is anything to go by. Alberto Contador saved his lead by the slenderest of margins, and he faces a mighty showdown with the Italians on tomorrow’s Passo Mortirilo. Depending on how much time he loses tomorrow – if any, of course – the race’s last-day time trial may have the deciding vote as to who wins the 2008 Giro d’Italia.

Today’s stage saw a classical Italian move against a foreign race-leader, and it almost paid off. In fact, it wasn’t exactly the case that all the Italians ganged up on Contador, but Di Luca’s attack with 45-kilometres to go forced Riccò to respond in order to protect his 2nd-place overall… The two Italians were seeking their own selfish goals, and perhaps without any pre-plan, they collectively put Contador in trouble.

It’s not to say Contador is in trouble – the Spaniard was in fact very strong considering the ammunition ranged against him – but stage 20 is likely to be a very painful day in the mountain for the little man and his team. Klöden was absolutely brilliant today, I cannot say enough good things about him - as too was Colom. We’ll have to wait and see if the team can muster the same efforts and more to cope with the aggressive racing against them tomorrow.

The Mortirolo is the steepest climb in the Giro – the nastiest by far. At 12-kilometres long, it can change the race for good if any one of the favourites is in difficulty. If it is Contador in such a way, the only hope is that Astana’s leader has some teammates not too far back who can close the time gaps on the following, gentle, ascent to Aprica. What gap is left after that chase will dictate how important Sunday’s TT is going to be… I’d say Contador can put 45-seconds into Riccò or DiLuca in such a time trial, so a bigger gap than that we don’t want to see in tomorrow’s finale.
Posted by Recovox at 6:06 PM