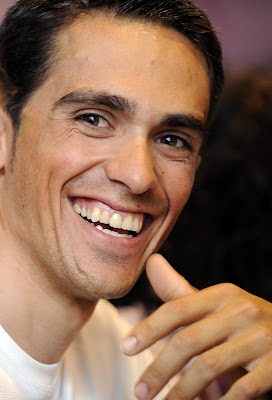 Alberto Contador’s visit to the radiologist today revealed a fissure in the radius head of his left elbow. The fracture, without dislocation, stems from his Stage 8 crash from Rivisondoli to Tivoli.

Though Contador was able to complete the stage and yesterday’s Stage 9, the bruising and discomfort prompted a formal examination on the Giro d’Italia’s first rest day. The x-rays showed that the fracture is stable and the 2007 Tour de France Champion has been cleared to ride tomorrow’s time-trial.

“As all riders know, winning a Grand Tour takes some hard work, luck and health. Unfortunately, having a small fracture does not make the journey to Milan any easier, but I’m motivated and will try to fight through the pain,” said Contador after his afternoon training ride.

“I do not intend to leave the race”, commented Alberto Contador at his return to the team hotel.

“During my training ride of today, I felt my elbow, but I felt as well that I could do the normal or desired efforts. So, why should I leave the race then? Moreover, this race is one of the big cycling monuments. I am a hard one, I stay. The last days my legs felt better and better. The longer I was in the Giro, the better I felt. “

An extra problem can be that, due to the position of the injury, the aerodynamic position on the time trial bike cannot be fully obtained.

“That is a problem for tomorrow”, continues Alberto Contador. “I hope I still make a good time trial. The doctors tell me that it is a small fracture. With a bit luck, I can recover a bit during the “easier” stages of Wednesday to Friday.”

Sports Director Sean Yates recognized that the first week of the Giro was quite a challenge for his Team.

“After a week of crashes and Grand Tour style racing, it’s good to have this rest day. We lost Steve Morabito the other day [dislocated shoulder], the Goose [Vladimir Gusev] was banged up earlier in the week and now Alberto has a small fracture.
It’s certainly not ideal for any team vying for the Maglia Rosa, but we’ll reexamine the injuries after each stage and hopefully make it to Milan with the remaining eight riders.”
Posted by Recovox at 9:29 AM