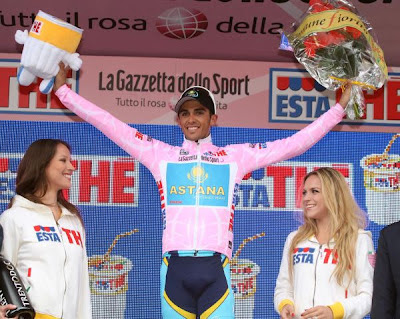 The defending Tour de France champion won’t be going back to France this summer to defend his title, so he’s making the most of the unexpected opportunity to race the Giro after organizers made a last-minute decision to include the team a week before the May 10 start in Palermo.

Q: Looking at the past two days, it was better for you today?

AC: The truth is yesterday wasn’t a good day for me at all. I had a lot of allergies to begin with, so considering how things went, I had to be content because I am not in top condition. Today when it started to rain, I felt a lot better.

Q: When the attacks came on the Giau, you had trouble staying with the favorites. What was going through your head?

AC: There arrived a moment when I didn’t feel very good. When they started to attack, I chased Riccò and Menchov, but I couldn’t get their wheel. I thought that my possibilities of taking the pink jersey were very slim. Then when we started to climb the Marmolada, my sensations were very different. Even though I broke my wheel, my head was totally focused on the pink jersey.

Q: What happened to your wheel? Did it happen when Bruseghin fell into you with about 5km to go?

AC: I broke a spoke on my rear wheel at the base of the climb. When I went to pump the pedals, I realized I had some sort of problem with the wheel because I could feel the wheel rubbing the brake. That’s why I tried to climb most of the time without standing in the saddle, so the wheel wouldn’t worsen. I bumped into Bruseghin when he fell, but the spoke had already broken earlier. With 6km to go, I was thinking about stopping to change the wheel or not. I decided not to and opened up my rear brake instead. I think it was the correct decision.

Q: Is this too early to take the jersey?

AC: Actually, I think it’s the perfect moment to take the maglia rosa. I came close yesterday with 5 seconds, so today to have it is the best moment. Tomorrow is a time trial, I don’t know the course like my Italian rivals, so they will have this advantage on me. I hope to climb in the morning with the team car. Tomorrow I won’t need my team. For them, it’s more or less a rest day. The following days are more normal stages so that we can control the race. Later we have two hard days, so I think it’s the perfect day.

Q: The differences are very small. Are you worried about that?

AC: Just like yesterday, we once again saw that the differences between the best are very small. What that shows is that everyone is more or less on the same level. This is good for me. They weren’t able to take too much time to me and I can take an advantage into the final time trial. We’ll see how it goes tomorrow. I hope things continue on the same way.

Q: Who do you see as your primary rival?

AC: I think the most dangerous now is Riccò. He demonstrated today that he’s very strong. But just as Bruseghin, Menchov, Di Luca and Simoni, all of them are very dangerous and we’re all on very small time differences. Any one of them can move ahead in the GC. You have to take it day by day and you cannot just focus on one rider. You have to watch them all.

Q: What does the maglia rosa mean to you right now?

AC: It’s like a gift. If they had told me 20 days ago when I was on the beach that I would be in the maglia rosa, I wouldn’t have believed it. I came here thinking about stages, but little by little, my condition improved. The people around me animated my spirits and they convinced me to keep fighting. The sensations improved and it’s for them that I am in the maglia rosa. My preparation wasn’t very good, so it’s nothing short of a gift to have this jersey.

Q: What can you expect from the remaining two time trials? What stages do you fear most?

AC: Without a doubt, the remaining two time trials should benefit me. It’s true that tomorrow is a different kind of time trial, it’s a climbing time trial on a very difficult pass, so it will depend more on individual strength than on being a specialist. So if things are close on GC, the final time trial will also favor me. Everyone will be attacking me. By far, the most dangerous is the stage over the Mortirolo (stage 20). It has two hard climbs, and even though it’s not a summit finish, the stage will be very hard and there can be big differences.
Posted by Recovox at 3:00 PM