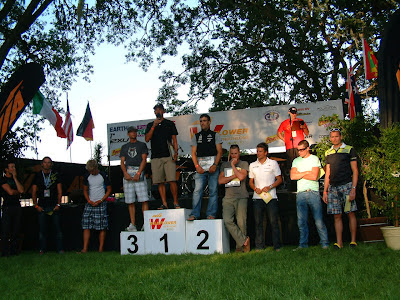 Modern Wildflower masters Chris McCormack and Samantha McGlone extended their domination of the legendary toughest half Ironman on the planet Saturday.

Llanos and McCormack overcame a 5 to 7 minute advantage enjoyed by defending champion Bjorn Andersson of Sweden (2:16:03) and super biker Chris Lieto (2:15:41) after the hilly 56-mile bike. McCormack’s race-best 1:14:59 run and Llano’s second best 1:15:59 half marathon propelled the two duelists past Lieto at Mile 9 of the run and carried McCormack to the fourth-fastest time overall in Wildflower history.

Lieto, who along with Andersson rolled his dice with a brilliant ride, ran out of gas on the run but held on stubbornly with a 1:23:11 run that gave him third overall in 4:03:34. Lieto, who had a breakthrough 6th place at Ironman Hawaii last October, finished a nerve-wracking 33 seconds ahead of 2000 Wildflower champion Chris Legh, who closed from 12th off the bike to 4th at the line with an impressive 1:15:38 run past the raucous and joyous Wildflower crowd.

“The last three miles, Eneko and I ran together and I just rolled the dice on that last downhill to the finish,” said McCormack. “I’m very proud I am unbeaten in my four tries at one of the greatest races in our sport. It’s always an honor to win here because of the competition – Chris Lieto rode like the wind today and we had to answer with a great run to beat him.”

And on a perfect spring day at California’s Lake San Antonio, Canadian Samantha McGlone kept her Wildflower record (wins in 2005, 2006, 2008) perfect as well, breaking away from Great Britain’s Leanda Cave on the first two miles of the hilly, half marathon run to nab her third Wildflower victory in near record time. McGlone’s race-best 1:24:32 run was the difference, putting 5 minutes on the 2002 ITU Olympic distance World Champion after they left T2 elbow to elbow.

McGlone crossed the line in 4:31:38, just 30 seconds off her 2006 race record, with a 5-minute 7-second margin of victory and a reversal of fortune regarding her disappointing, season opening 5th place finish at California Ironman 70.3 at Oceanside in March. Cave finished third in Oceanside, three minutes ahead of McGlone.

Typically, McGlone started slow, emerging from the 1.2 mile swim in 65-degree Lake San Antonio in 25:51, 2:44 behind Pip Taylor and 1:20 behind Cave. “Before I could get up that first steep climb leaving the campgrounds, my chain came off and by the time I put it back on, Sam arrived,” said Cave. “So I decided to stay with her on the bike.”

While Taylor, just recovering from an illness she contracted last week at St. Anthony's fell eight minutes back during a "bad patch" on the hilly bike, McGlone and Cave rode in formation all the way to T2. “It’s funny,” said Cave. “At California Ironman 70.3, Sam and I came off the bike together and I outran her. But the first four miles here are very hilly and tough and Sam just ran off and put three minutes on me right away.”

At the end, McGlone and Cave congratulated one another. McGlone had nailed a message to the rest of the tri world with the second-best Wildflower time ever. Cave, taking heart that in her first ever Wildflower, feeling just this side of sick all day, she had posted one of the top 10 Wildflower women’s times ever. “This course is just like the hills of Marin where I live and train in the US,” said Cave. “Next year, I’d like to see what I can do when I know the course and I’m feeling a little better.”

For McGlone, she must be happy that she is right on target for a second appointment to see who will be the Queen of the Queen K this October.