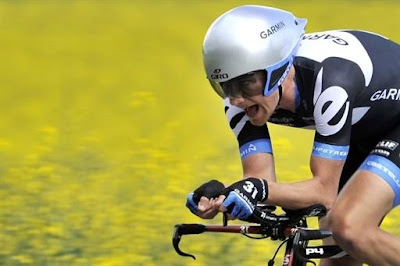 David Zabriskie (Garmin-Cervélo) took time trial victory at the Tour de Romandie to claim his first win since last year’s Tour of California, while Cadel Evans (BMC) struck a potentially crucial blow in the race for overall victory by snatching the yellow jersey.

Zabriskie may have enjoyed slightly more favourable wind conditions than the very latest starters, but the American was still full value for his victory. On an undulating 20.1km course, Zabriskie’s class told over the testing terrain as he pipped Richie Porte (Saxo Bank-SunGard) for the win.

Among the day’s early starters, Porte had the best time at all of the intermediate checks, with Zabriskie the only man to threaten his marks. Eventually, the American’s strength would tell over the final 5km, and he managed to pull off the win.
Posted by Recovox at 11:29 AM