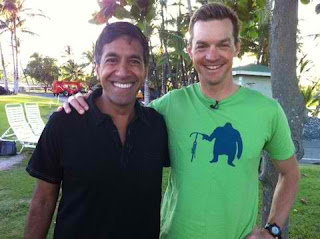 The Following article was written by Tim after he and his wife, Nicole DeBoom, traveled to the Mauna Lani Bay Hotel and Bungalows on the Big Island of Hawaii, and worked with CNN’s six novice triathletes last week. They helped them prepare for the August 7 Nautica New York City Triathlon. They worked on the specific sports of triathlon, swimming, biking and running, as well as how to be more mentally tough.

The Big Island of Hawaii has given me many gifts over the past 20 years. Some have come as victories in the Ironman Triathlon, others as hard lessons learned through disappointment, and still more just from the beauty of exploring an incredible island in the middle of the Pacific Ocean. This past week, I received another unexpected gift from working with a group of people all training for their first triathlon.

When I first met the CNN 6-pack on the first morning of their trip, I could see and feel the nervousness in each of their faces. They were excited, but definitely a little unsure of what was ahead of them in the coming week.

Ironically, I was proud of them before we even started the first lecture. They were here. They had taken a chance, gone through the application process, and accepted this challenge. That was a courageous act. All of us are guilty of getting caught up in our own little worlds and letting our lives become unbalanced. Acknowledging that need for balance and then willing to make the tough changes to find it, takes courage. And to do it all under scrutiny, on national television, is downright brave.

Throughout the week I was amazed at the determination and enthusiasm all the athletes showed. They soaked up the lectures and workouts like coral reef sponges, asking questions and coming back for more each morning. They all had their strengths, weaknesses, and fears. None of them ever gave up.

Even the leader of CNN’s Fit Nation, Dr. Sanjay Gupta, showed that he struggles with balance in his life. He admitted to not finding the time to train for the upcoming triathlon like he wanted, but he was there with the other athletes, pushing his body and vowing to find more time in the coming months.

I walked away from the week rejuvenated. The energy of the 6-pack was contagious and I found a little extra energy during my own workouts just thinking about how much improvement the group had made in a few short days. They all had a little confidence in their eyes when we said goodbye, that only some time on the Queen K highway can give you. That will serve them well as they continue their training in preparation for the big day. Most importantly, I can feel that this challenge is not a passing fancy that will end with the race in August. I think they are all committed to continuing their fitness goals.

All the best of luck to Kas, Kendrick, Scott, Joaquin, Stasia, Nina, and Sanjay too. Keep up the great work. Continue the search for the balance we all seek. I will be watching along with everyone else and rooting for you every stroke, pedal, and step of the way.

Tim DeBoom
Posted by Recovox at 9:43 AM