Cancellara warns rivals to fasten seatbelts ahead of Paris-Roubaix 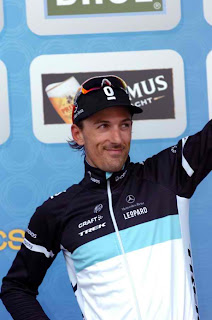 Swiss rider likens himself to gladiator

Fabian Cancellara (Leopard Trek) has thrown down the gauntlet ahead of Sunday’s Paris-Roubaix and stated that his rivals know that they “must fasten their seatbelts” whenever he goes to the front.

Still smarting from his third place finish at the Tour of Flanders, Cancellara explained that he attacked from distance on the Leberg in order to mark the history of the race. While the Swiss rider appeared to over-estimate his strength and was reeled back in at the foot of the Muur, impressively he still had the wherewithal to spark the winning move in the closing kilometres.

“I wanted to do something perfect [at the Tour of Flanders],” Cancellara told Corriere della Sera. “It didn’t work out like that, I showed that I am human and maybe it’s better that way.”

Cancellara claimed that the remainder of the Tour of Flanders field rode against him on Sunday, and damned winner Nick Nuyens (Saxo Bank-SunGard) with the faintest of praise for the manner of his triumph.

“I’m very happy: there were fifty of them behind a gladiator,” Cancellara continued. “It was a spectacle and a double satisfaction: I lost by trying to win, the others rode only to make me lose. And in the end the one who was always in the wheels won. Congratulations to Nuyens, but for me [winning] like that has no value.”

Although his hopes of winning the Flanders-Roubaix double for the second successive year have been dashed, Cancellara believes that he is the favourite to collect his third Hell of the North on Sunday.

“In Flanders I was the only one of the big riders in front, and so I would say I am still the number one favourite,” he said. “I am the only man in the world who can make an attack like the one in Flanders, or in Roubaix in 2010. Everybody knows that if I’m at 100 percent they have to fasten their seatbelts, like on an aeroplane.”

Cancellara’s stunning classics campaign twelve months ago sparked allegations that he had been aided by motor hidden in his bike. The rumours came to a head when a Davide Cassani demonstrated the capabilities of such a bike on Italian state broadcaster Rai, and that commentary later formed part of an accusatory YouTube clip created by journalist Michele Bufalino.

Bufalino has recently published a book on the issue of motorized doping, entitled La Bici Dopata (“The Doped Bike”), and Cancellara voiced his frustration that the matter was still being discussed.

“Cassani, who made the video, has never come up to me,” Cancellara said. “This Bufalino who has written the book on the doped bike, I’d liked to pin him to the wall. If he introduced himself to me, I’d have to ask him two things – why is he doing all of this and whether he can see well.”

Cancellara was also critical of the current anti-doping system, and suggested that too many different agencies were testing riders and that cyclists were tested more often than other athletes.

“It would be important to have better balance,” he said. “If I continue like this, I’ll break my record of 58 controls in 2009. It doesn’t seem right to me and it makes me suspicious. Sometimes the different anti-doping bodies seem to work one against the other, and a lot of money is thrown away.”

While Cancellara was the man who led protests against the safety of the roads on stage two of the 2010 Tour de France, he said that there was little he could do about some of the current political disagreements plaguing cycling.

“I always look to help my sport,” Cancellara said. “But even I can’t solve the problems that are there now, and I am among the top riders. They are related to politics, money and the show of power. Alone against all of this, I can only lose. Unfortunately the ‘mafia’ exists everywhere, and I’ve understood that speaking too much is not profitable.”
Posted by Recovox at 11:28 AM