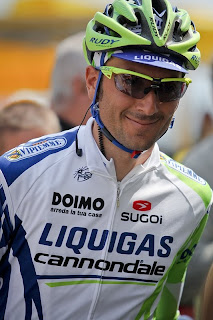 Ivan Basso (Liquigas-Cannondale) has put his recent indifferent form down to the fact that he has raced early and often this season. The Italian is currently competing at the Tour de Romandie, where he continues his build-up to the Tour de France.

“I started in January when I rode the Tour de San Luis in Argentina,” Basso told L’Équipe. “I’ve racked up racing days without ever being totally relaxed because a rider of my stature is always a little at the centre of attention.”

Basso took victory at the GP Lugano in February and was present near the front throughout Tirreno-Adriatico. However, he failed to make an impact at the Volta Catalunya and was forced to abandon the Tour of the Basque Country, citing illness.

“I didn’t have any feeling,” Basso explained. He subsequently completed Flèche Wallonne and Liège-Bastogne-Liège in 50th and 72nd place respectively. After beginning his season with the intention of picking up a series of victories in the spring, Basso now admits that his sole focus is on preparing for the Tour de France.

“My body finished up by saying ‘stop’ and my sole concern from now on is to get my approach to the Tour back on track,” he said.

After Romandie, his next stage race will be the Critérium du Dauphiné in June, and Basso also has a training camp at altitude in the Dolomites pencilled in immediately before the Tour.

Basso also refused to be drawn on the possibility that Alberto Contador (Saxo Bank-SunGard) might not be on the start line of the Tour. The Spaniard is awaiting a verdict from the Court of Arbitration for Sport after the UCI appealed his national federation’s decision not to sanction him for a positive test for Clenbuterol at last year’s Tour.

“I’m not worrying myself with that kind of consideration,” Basso said. “Cycling has only one tactic: ride faster than the others. There is very little physical difference between the top eight or ten Grand Tour riders in the world, and everything is decided by tiny details, notably in the approach to the race.”
Posted by Recovox at 11:27 AM