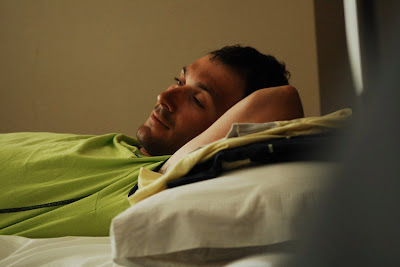 While the “work hard play hard” philosophy may be a great approach to striking a work-life balance, the motto cyclists and all athletes should subscribe to leans more towards a “work hard rest harder” philosophy. Many recovery modalities have been suggested and adopted, but how well do they work for recovering between hard training bouts?

Take it Easy
It’s one of the most basic principle in the entire wide world of training, but also the one that is most often broken by athletes. While it’s the easiest thing in the world to train hard, resting adequately is possibly the most difficult and challenging obstacle for athletes to overcome.

Most of us ride our bikes because we love to ride our bikes, and a lot of that love comes from riding hard and feeling that effort soak into our bodies. In some ways, the highs from cycling comes not just from the act of bicycling, but from the act of pushing ourselves. Therefore, one of the hardest thing for “serious” cyclists to do is to rest and recover adequately. Going easy just seems like the complete antithesis of cycling, and we often go too hard on our easy days to make them true recovery days.

Why go for easy rides at all or focus on recovery? Training is all about stressing your body with hard workouts, and then letting your body adapt to that load. If you do not allow your body to recover and adapt to the training load you’ve imposed on it, you simply will not be able to train and stress your body as hard the next workout. Do that over the course of a season, and it should be obvious that lack of proper recovery is often what sets many of us back from our potential.

I have been quite guilty of this myself through the years. So now, when I schedule easy days during my 17 km commute to university, I’ll often play a game of trying to keep the average wattage under a certain threshold. Or alternately, I’ll make a game of trying to get the ride done with as few kilojoules of work as possible.

Rushing Recovery?
OK, so it’s important to recover from our training. But that doesn’t mean just putting our feet up on the couch and letting nature do its thing or else noodling around on the bike, right? Surely there must be some way to accelerate the process?

The idea of accelerating recovery has obsessed athletes and sport scientists through the ages. The traditional methods have revolved around either passive rest, or else to do light exercise as a form of active recovery. The idea behind active recovery is generally to keep blood flowing through the muscles in order to flush out metabolic waste products.

More recently, the two main forms of high-tech recovery methods revolve around cold therapy of some form, either lower-body immersion into a cold or ice bath or some form of icing. The general theory behind such a recovery method is that the cold water acts like an ice pack, reducing swelling and inflammation following hard exercise and muscle damage. The other increasingly popular form of recovery has been using compression garments, which increases the pressure around the lower body and theoretically speeds up the removal of waste metabolites. What has not really been tested before, and the focus of what we’ll discuss today, is the combination of compression and cooling.

The Best of Both Worlds?
Despite their popularity, the scientific evidence for either cold water immersion recovery or compression garments are equivocal at best. Some studies have been able to show a decrease in perceived muscle soreness and some physiological markers of muscle damage. However, very few studies have been able to clearly demonstrate a substantial improvement in a second bout of exercise after using specific recovery modalities. Part of this is simply due to the somewhat surprising fact that very few studies have actually used a second specific bout of exercise as their performance measure post-recovery.

In the May 2011 issue of Medicine and Science in Sports & Exercise, my colleague and friend Romain Meeusen’s group at the Vrije University of Brussels, in the Belgian heartland of cycling, explored in-depth the efficacy of recovery modalities specifically for cycling performance. The nice aspect of this study was that it was very directly designed with cycling in mind, rather than most studies on recovery using strength training or other non-cycling exercise. Strength training-based studies are doubly problematic because the damage from jumping exercises like plyometrics is often far more damaging and different than anything we do on the bike.

The basic setup of the study:

• Trained but non-elite cyclists were tested, with VO2max values of about 57 mL/kg/min.

• The exercise test was designed to simulate a hard time trial effort. This is nice because it replicates hard interval work, or else a time trial as part of a two-stage day in a stage race. The test consisted of 30 min at 55% Wmax (maximum power obtained during the initial fitness testing). Then, a time trial effort based on completing the work equivalent to 75% Wmax for 30 min (e.g. if your Wmax was 300, then your TT consisted of completing 405 kJ).

• The test was performed twice each trial, with 2 h in between for the recovery protocol.

The five recovery modalities tested, in two separate but similar experiments, were:

2. Combined compression/cooling using a set of inflated leg cuffs with coolant running throughout. The cuffs ran around the upper leg, thus cooling and compressing the thighs and hamstrings. The cuff was set to a pressure of 20 mmHg, and the coolant at 0oC, resulting in a skin temperature of ~15oC.

Cool Results?
So what we have is a study that aimed to test the combined effects of both thigh compression and cooling, with the theory that the combination may work better than either independently. At least in theory, anyway, the compression is thought to increase the cooling capacity possible with the icing/coolant.

Did things play out? Did performance in the second TT improve, or at least not degrade as much, with one recovery modality? First off, remember that #4 and #5 conditions were in a separate study with different athletes so that, while the overall methodology remained similar, perfect cross-transfer of results isn’t possible:

Keeping in mind that the reliability of the 30 min TT is pretty high and even small differences can be very significant in applied settings, and it is quite eye-catching that the only improvement was seen with active recovery alone. It is especially interesting that the second TT improved, rather than degrading as we’d expect.

Summary
This is one of the better cycling-specific studies that I have come across that focuses on recovery. It has cycling-relevant exercise, and also tested out a broad range of recovery methods encompassing the “traditional” methods of passive and active recovery. From this study, anyway, the conclusion appears to be that active exercise at a very light intensity is the best method for recovery from hard efforts. Therefore, while compression and cooling strategies may have specific uses (e.g. after heaving damaging your muscles or in very hot conditions), they are not necessarily a panacea for recovery from all types of training.

The good news is that recovery can actually be very simple, consisting of making sure you cool down properly after a hard workout. This can be done either on the road or on the trainer. However, the absolute key is to keep the intensity low and not make it a substitute workout.
Posted by Recovox at 9:02 AM