Kara Goucher balances motherhood, training as she preps for London 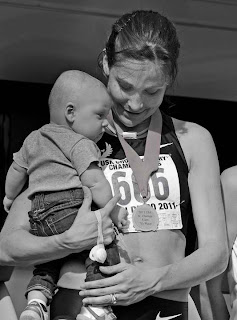 On Sept. 25, Kara Goucher went out for a morning run before heading to the gym to lift some weights. Nothing unusual or especially taxing there. You would expect as much from one of the country's top female marathoners. Then later that evening she gave birth to her first child. This is really going the extra mile. "My doctor was a runner and she told me I could run through the pregnancy," says Goucher, 32. "I was three centimeters dilated and so I was pretty careful. And pretty slow."

That's relative. By her estimation, Goucher traveled five miles that day, at a 10-minute pace. Her husband, Adam, an Olympian at 5,000 meters in 2000, was at her side just in case Colton Goucher made an early arrival. Colt waited. His mother doesn't have the same patience. "After Colt was born I couldn't wait to run again," she says.

She reluctantly waited a week, and without the additional 30 to 35 pounds she'd been carrying, and with the joy of new motherhood fresh in her mind, Goucher had a run she described as "sore and slow, but one of my best runs ever. My legs have never felt stronger."

Goucher upped her mileage and earlier this year she placed second at the Arizona Half-Marathon and seventh at the U.S. Cross-country Championships in San Diego. By her definition, her first real race will be the New York City Half-Marathon (a.k.a. The NYC Half), winding through Central Park and the streets of New York on Sunday. "I need to know what it feels like to really race, to go in there and fight for it," she says. "That makes the half a big test." Next month, Goucher plans to stretch herself out further at the Boston Marathon, a race in which she placed third in 2009.

To refresh Goucher's memory of speed as she resumed training after the pregnancy, her coach, Alberto Salazar, wanted her to look back on workouts she had before her major marathons. "It took me a week to do that," she said. "I wasn't sure I was ready to know how fast I had been so I'd feel guilty about how slow I'd become. Psychologically I didn't want to take that step back."

To meet Goucher is to miss the intensity. Go on, look for it. She's outwardly cheery, funny and, as friends will tell you, a little sappy, especially when it comes to motherhood. "I couldn't imagine anything that could make running a second priority," she says, "but this changes things. I don't want to be away from Colt for a second." Perspective changes, perhaps, but not resolution.

Goucher had some of that growing up. She was four when she lost her father, Mirko Grgas, who was killed by a drunken driver on the Harlem River Drive. Her mother, Patty Wheeler, moved the family to Duluth, Minn., where Kara discovered running and found an inner drive. She competed for the University of Colorado, where she majored in psychology. In 2006, she won bronze at 3,000 in the World Cup in Athens, showing signs of being able to challenge the world's best, but always struggled with confidence in big moments.

That changed in 2007, when she won a surprising bronze medal at 10,000 meters at the World Championships in Osaka. Still, given the shifting emphasis from speed to stamina as runners move up in distance, Goucher knew she would be better suited for the roads than the track. "It was the first time I really got rid of those negative voices in my mind and went for it," she says. "It set me up to be able to take more risks. I had a great race, maybe my best race, at 10k, but my heart is in the marathon."

Later that year, she competed in her first half-marathon at the Great North Run in Newcastle, U.K., where national favorite Paula Radcliffe, the fastest marathoner in history, was clearly expected to win. Goucher never figured the day would unfold as it did. Early in the race, she and Radcliffe were passing a water station when their feet collided and Radcliffe nearly tumbled. "My first thought was, I'm not going to be the stupid girl who trips Paula Radcliffe," she recalls. But soon after, Goucher began to build a lead and eventually pull away from the field. "So then I thought, OK, I'm not going to be the stupid girl who beats Paula Radcliffe, but then gets gobbled up at the end," she says. It didn't happen. Goucher won the race by an astonishing 56 seconds, with Radcliffe finishing second.

In the past few years, the two women have become fast friends. They exchanged training ideas, especially with both of them eyeing the Olympic marathon in London 16 months from now, and even had the same due dates for their pregnancies. Goucher delivered four days early. "It means I have four extra days of training for London," she says triumphantly.

That race should be different than the spring or fall marathons in New York and Boston where the rolling courses are more challenging, but the usually cool weather is more forgiving. "It will be warmer in London," Goucher says. "It's fairly flat, so people will be more willing to take chances. We talked about wanting to be able to run either kind of race: slow and tactical or very fast. I want to be ready for other people's moves."

For now, Goucher is getting plenty of practice at thinking a step ahead. Colt is poking at an equipment bag. It's time to cover another move.
Posted by Recovox at 1:44 PM