Kara Goucher - Not My Day, But That’s Okay 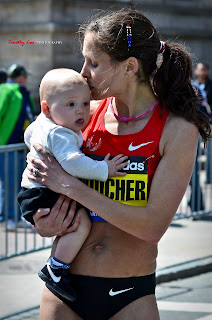 You never know what you’re going to get when you start a marathon. If your training hasn’t gone well or you’re not feeling good, you know you probably won’t set the world on fire, but you may still run better than you expect. When you’re training has good really well and you do feel good, you may know your worst-case scenario can’t be all that bad, but you may still run worse than you expect.

By the time I was three miles into the Boston Marathon on Monday, I was already worried. I just didn’t feel comfortable. Although the pace was fairly quick, it didn’t feel too fast, and my breathing was controlled. But my body felt tight and out of sync in a way that’s hard to describe. My left hamstring was especially tight. Every runner has these days occasionally, so you probably know what I’m talking about. There’s no real explanation for them, just as there’s no explanation for those special days when you feel incredible. All you can do is hope you don’t have one of those unexplainable flat days in your most important races.

I tried to tell myself to stay relaxed and positive. I might loosen up as the race went on and start to feel much better—because that can happen sometimes too. But it didn’t happen for me on Monday. By halfway, I knew it was not going to be my day. I still felt totally out of rhythm. That’s when I really started to struggle mentally. It’s not easy to keep running as hard as you can and hurting more and more with each passing mile when you know that even with all this effort and pain you will still fall short of your goal.

By 16 miles I was completely out of contention. The real race was ahead of me. Then Desiree Davila went by me looking amazing. I knew she had a chance to catch the leaders and maybe win. As she passed me, she encouraged me. “Keep your eyes up,” she said. Now that’s classy.

When I hit the hills between 19 and 21 miles I thought about dropping out. It seemed pointless to subject my body to the thrashing of the last several miles when it wouldn’t even put me on the podium. The one thing that kept me going at that point was the encouragement I was getting from the best marathon spectators anywhere in the world. As bad as I was feeling, the support I felt from all of those people shouting my name and words of encouragement gave me just enough of a lift to keep trying as hard as I could.

Once I got past the point of wanting to quit, I started to feel a little better—mentally, not physically. I was able to accept that it just wasn’t my day and realize I needed to let this one go and start looking ahead to my next goal and trust that I would be really “on” in my next big race. The one thing that continued to bother me was knowing what Adam was going through. I know how much my happiness means to Adam, and I could imagine how tormented he probably was, seeing me off the back and assuming I was crushed by it. I found myself wishing I could flash some kind of signal that a TV camera would pick up and that would tell him I was okay. I was disappointed, but I was accepting what was happening.

I was able to pick off a few runners over the last few miles, not because I got a second wind but because they were dying. It didn’t matter to me much one way or the other at that point. I was actually thinking about Desi, wondering if she was going to pull it off. As soon as I finished, race officials started asking me if I was okay, and other questions, but I ignored them and kept asking them, “How did Desi do? How did Desi do?”

I was almost surprised by how disappointed I was to learn that she had come up just short. I’m not going to lie: I want to be the woman who ends the American drought at the Boston Marathon. But I was so impressed by Desi’s self-belief, her guts, and her class, that I really forgot about what I wanted for myself and threw my support behind her as a fellow American. One thing is certain: Desiree showed that it’s only a matter of time before one of us pulls it off.

People who remember how heartbroken I was after finishing third in Boston in 2009 might assume I’m heartbroken after finishing fifth this time. But I’m not. I feel pretty good, actually. Yes, I’m disappointed that I didn’t run quite as well as I think I was ready to run. But I came away with some positives. First of all, I set a PR! That’s always something to celebrate. Also, my stomach didn’t bother me at all during the race. That’s huge, because I’ve had GI issues in all of my previous marathons, and it was a major factor holding me back as a marathon runner generally. I have my nutrition sponsor, Nutrilite, and their awesome sports drink, ROC2O, to thank for finally solving that problem.

I had a great time in Boston overall. I can’t tell you how much I appreciate all of the people who came to see me at Niketown and who came up to me around town to say “Hi” and wish me good luck. A lot of you said things like, “I’m sorry to bother you” and “I hope this is okay,” and let me assure you, you did not bother me and it is more than okay! I feel like the most fortunate runner alive to have that much positive energy flowing my way from my peers.

My final thought about the 2011 Boston Marathon is that it was worth it. When I set my goal to run the race I knew it was unlikely to be my best-ever Boston Marathon, because of my recent pregnancy, but I didn’t want to assume it wouldn’t be. Above all, I didn’t want to skip it and then always wonder if it wasn’t the year I was meant to win. Turns out it wasn’t, but I’m glad I know it instead of having to wonder about it, and I’m proud of my effort.