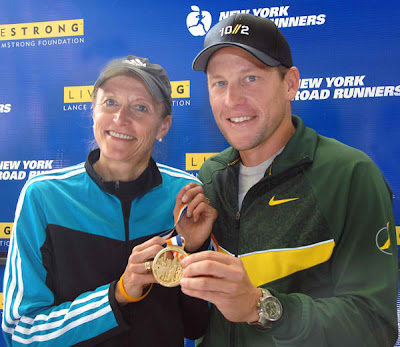 Waitz revealed in 2005 that she had cancer, without disclosing details. Her death was confirmed by her husband, Jack Waitz.

Waitz won nine New York City Marathons in her career, a mark that no woman or man has ever duplicated. Unassuming and yet fiercely confident, she inspired runners around the world, from Norway to New York, staying involved in the running community despite her health problems.

She was a geography teacher from Norway who came to New York for the first time with her husband. She came on a whim, for a chance to explore a new city, an opportunity to run a different kind of race.

Fred Lebow, the founder of the New York City Marathon, thought Waitz might be a good pacesetter, since she was a world record holder in the 3,000 meters in track. She had never run more than 16 miles in a training run. Jack, who was her coach as well as her husband, knew that she could run more.

Grete Waitz didn’t come to set a pace. She not only won the 1978 New York race, but also set a world best, finishing in 2 hours 32 minutes 30 seconds — two minutes faster than the previous mark.

The only problem was when Waitz crossed the finish line, nobody knew the blond woman wearing bib No. 1173.

The world, and the city, soon found out.

“Every sport should have a true champion like Grete, a woman with such dignity and humanity and modesty,” said George Hirsch, the chairman of the New York Road Runners, and a friend of hers since 1978. “New York adopted her as one of its true heroes, but unlike so many sports champions, Grete was down to earth. She was just happy to visit, blend in, talk to people, runners who came from all over the world always went right up to her. She just had time for everybody. She symbolized what was so great about what was so great about the community of marathoners.”

Grete Andersen was born on Oct. 1, 1953, in Oslo, and grew up running in the woods near her house with her brothers Jan and Arild. Both of her brothers had been running the marathon in New York for the last 25 years. She is survived by her brothers and her husband.

She was just 18 when she competed in the women’s 1,500-meter race at the 1972 Olympics in Munich. She was eliminated in the first round, but her career as a competitive runner and pioneering athlete was just getting started.

She set the world record at 3,000 meters in the summer of 1975, but did not make the finals of the 1,500 at the 1976 Olympics in Montreal. Her chance at a third straight Olympics was foiled when Norway joined the American-led boycott of the 1980 Moscow Games over the Soviet invasion of Afghanistan. In 1984, suffering from back spasms, she finished second to the American Joan Benoit in the inaugural women’s Olympic marathon.

Waitz won her last New York City Marathon in 1988. Her most famous race in New York — which she considered her 10th victory — was at the 1992 marathon when she ran with Mr. Lebow who had been, at the time, in remission for brain cancer. The two crossed the finish line with their hands joined, their arms held high. Lebow died in 1994.

For the last decade, with her health problems, Waitz sat in the pace car for the women’s race in New York. In Norway, Waitz established a foundation for cancer, Aktiv Mot Kreft, which sponsored runners in major races and supported activity centers at hospitals in Norway, much like the one in Oslo, where Waitz had received treatments.

“I am convinced you can go through a lot more when you are physically fit,” she said. “It is both physical and mental. With the athletic background, you think more on the positive side — you can do this.”
Posted by Recovox at 8:47 AM