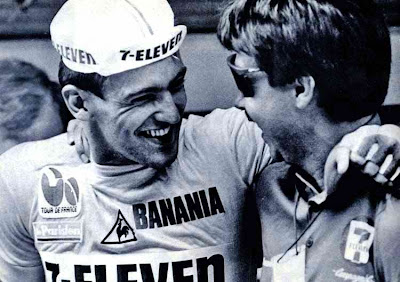 Alex: 2011 marks two big milestones for you: you turn 50 today, and July 5 marks the 25th anniversary of your taking the Tour de France yellow leader’s jersey. I imagine the emotional wave is already starting to consume you...

Well, I don't know about 'consuming' but it certainly feels surreal – 25 years ago (half of my life!) sounds like a long time but it doesn't feel that way. Our 7-Eleven team had an incredible run in the '80s and I was proud to be a part of that team. We really had incredible team spirit, something that is witnessed by the fact that we get together for a reunion every five years or so.

Does 50 suit you? How do the legs feel on the bike?

Did you have a specific strategy on July 5, 1986, and did you share it with anyone in the organization? Whose idea was it for you to wear a one-piece skinsuit on Stage 2 from Nanterre to Sceaux? It was a short, 53-mile stage...

As an ex-pursuiter and criterium guy, I knew that this distance would be perfect for me. There was no need to carry any food with me and there was no rain in the forecast, so why not use a skinsuit? I knew there were time bonuses and I was the best-placed guy on our team after the prologue, just 17 seconds down on the General Classification.

You never know what can happen, but I had a solo break in the back of my mind. I didn't actually share this with my teammates as it would have sounded a bit audacious: "it's our first stage in our first Tour and I'm going to go solo, okay guys?" But, I knew if I got away, they would cover the chases.

The time bonuses ended up working out perfectly; the last one I went through was close. Mike Neel – our Director Sportif – had to come up in the car and encourage me to go harder as a break was catching me. That extra bonus made the difference in the end.

Phil Anderson was racing for Panasonic that year, and seemed hell-bent to chase you down. There were 204 riders breathing down your neck. Could you feel the pressure? What was going through your mind?

I certainly knew that everyone of those riders wanted to win the stage, and that it could certainly come down to a bunch sprint. When Phil’s break caught me, he gave me a pat on the back and told me “mate, you’re in the jersey”.

From that point on I realized that I had to keep the break away from the main field so (Eric) Vanderaerden couldn’t win the bunch sprint and get an additional time bonus to leapfrog me. Once the break caught me, I covered every attack to keep us together and hung on for dear life, as another attack went. This way, the break was motivated to keep working together since they all thought they had a chance to win the stage.

You finished fifth on the stage, but took the yellow leader’s jersey from prologue specialist Thierry Marie. Did you realize the gravity of the situation right away, or did someone have to tell you?

Once I had gone through the third time bonus sprint, I knew that I had a chance and I rode maximum for the rest of the stage; I wasn’t thinking about the team trial trial, just getting to the finish of that stage ahead of the main field.

Do you think it was cruel fate to have become the first North American to wear the yellow jersey, especially ahead of Greg LeMond, who was on a trajectory to take it before anyone else? Did you and Greg talk that day?

We didn’t really have much interaction with LeMond. I certainly didn’t speak with him. You could tell there was lots of tension on his La Vie Claire team, and we were busy trying to stay out of trouble and represent North American cycling.

Many of the Euros were looking down on us and we had to be careful to not get in the way! A few Euro pros befriended us, including (1978 world road champion) Gerrie Knetemann, and they made an effort to speak English and, I think, understood our precarious situation.

Let’s talk about the 34-mile team time trial from Meudon to St. Quentin, the second of two stages on July 5, 1986. Watching coverage from that day, you ran out of gas after some unfortunate issues. Then the Peugeot team passed you; was the earlier effort that day that got you into yellow just too much?

Our TTT was a disaster from many perspectives. We hadn’t pre-ridden or pre-driven it, nor had any of our team management. We simply looked at the course map in the race bible before the start and then we were off. There were incredibly fast sections of downhill with T-intersections at the bottom, one where we had to turn left onto a main road with a traffic island in the middle. Half of us went one way, while the other half went the other and three guys crashed. It was early in the TT so we decided to wait. It took forever to get wheels changed and then we were rolling again.

Final count for Team 7-Eleven was four flats and one crash in 1 hour, 16 minutes. La Vie Clair, finished two minutes behind the leaders, so in reality, it wasn’t a good day for most, including Americans Andy Hampsten and LeMond. Fignon and Systeme U won handily that day, taking back the yellow jersey for Thierry Marie. Stieda was now 5:10 behind Marie. Stieda continues the commentary…

In retrospect, I shouldn’t have been pulling as I had laid it all out during the morning’s stage. But, since I wasn’t a GC contender, I just did my part. We entered a crosswind section and half our guys didn’t know that we should use the whole road to form an echelon. At that point I was gassed and started to open gaps. Mike

Neel drove up and told Jeff Pierce to drop back and help me and we rolled in together, just making the time cutoff. We were pretty blown and really didn’t say much during that ride. The writing was on the wall and we directed all of our energy to getting to the finish line.

The next day was a 214 kilometer stage from Levallois-Perret to Liévin. How did you muster up the strength to continue, knowing that the only rest day of the entire Grand Tour wasn’t until July 22?

I still had the polka dot jersey to defend so that gave me motivation to stay in the front of the race. I focused on timing my efforts to be at the front when the short hill sprints came up and stayed in the jersey for five days.

You stuck it out and finished 120th overall by Paris, where LeMond took the final yellow after battling with Hinault. 1986 was the only time you competed in the Tour; why did you never return, and what was your focus after that?

I ended up racing quite a bit in Europe after the ‘86 Tour, but we really needed guys who could specialize in the longer stage races and I was performing well in other events, so it made sense to focus on strengths at that point, where I could add the most value for the sponsor.

How long did you race for Team 7-Eleven?

I started in February 1982 (my first race was at the parking lot of Caesar’s Palace, which I won!) and ended after 1990 when 7-Eleven’s sponsorship ended and Motorola took over, so nine years total.

How and when did you connect with the Coors Light team?

I had lots of connections in the sport and the industry by that time, including (7-Eleven teammate) Davis Phinney, so when he heard I was looking, I spoke with (Coors Light director) Len Pettyjohn and we got it figured out. They included a Softride (beam) bike in the deal and I was able to win some races for the team and for Softride.

Several former 7-Eleven teammates raced with you during those dominating Coors Light years. Phinney, Ron Kiefel, Alexia Grewal, Scott McKinley…Give us a peek into what is was like.

I think the biggest thing was the camaraderie, on and off the bike. We really enjoyed each other’s company and trusted each other. We knew each other so well, and were able to take advantage of our tactical strengths which made a huge difference. Our lead outs were just amazing, and often after getting three or four of us in a ‘train’ at maximum speed on the last lap of a criterium, we looked back and no one had stayed on our wheels!

Looking back on your career, is there anything you’d do differently with the knowledge you have today?

Well, certainly training knowledge has advanced but I think the biggest thing I would have done differently is actually moved to Europe and committed to living there. As it was, we were constantly travelling back and forth to race in North American and Europe. It made it hard adjusting to an 80km criterium one weekend, then a 250km classic the next. And, I would have focused on races that I had the best chance of doing well in, which were the races in Belgium with short climbs and cross winds.

Which of your former teams would have performed better if a Tour of California existed: 7-Eleven or Coors Light?

Hard to say but I think 7-Eleven since we had more Euro racing legs under us, which is what those stages are like.

What prompted your retirement, and what did you do after that? I recall meeting you at CABDA in the Softride booth.

I was married and had a daughter, and the reality of life was certainly right there in front of me. Softride had offered me a position as their sales manager and I realized that I wouldn’t be racing much longer, and those offers don’t come up every day. It just seemed right to transition at that time and I’ve never regretted it.

We spoke recently about the growing popularity of Gran Fondos. What’s happening in Canada, and how are you involved?

Gran Fondos are catching on in Canada in a big way. I’m going to participate as an ambassador for two of them, Gran Fondo Whistler and Gran Fondo Kelowna. Last fall I did the Whistler ride and went too hard, trying to stay with the lead group! This year I’m going to stop at the rest stops and enjoy the ride.

For more stories click on the title link to read more from Gary.
Posted by Recovox at 7:35 AM