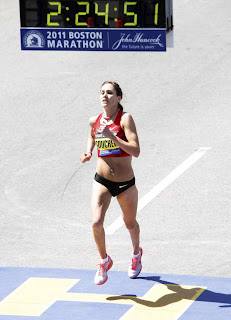 Alberto Salazar stood in a media area watching the live race feed and shouted at the screen, imploring a runner that he doesn't even coach to summon one more ounce of energy.

"I was so excited I was yelling and screaming with 300 (meters) to go," Salazar said.

He wasn't alone. Crowds screamed, cheered and chanted "U-S-A!" for Desiree Davila near the finish line on Monday as she tried desperately to become the first U.S. woman to win the Boston Marathon in 26 years. As it was, she was the first to place second in 18 years.

Davila's duel with Kenyan Carolina Kilel over the final dramatic 600 meters of the 26.2-mile race brought into focus the progress top U.S. runners are making toward a breakthrough at a major marathon.

Kilel had just enough energy to make a final push that Davila couldn't respond to, and she reached the finish line in 2 hours, 22 minutes, 36 seconds before collapsing to the pavement. Davila was two second back.

Equally stunning was the incredibly fast pace of the men's race. Kenyan duo Geoffrey Mutai (2:03:02) and Moses Mosop (2:03:06) pushed each other to the fastest marathon times in history.

And U.S. hopeful Ryan Hall, who led more than half the race, held it together and finished fourth on Boylston Street in 2:04:58. That's more than 20 seconds faster than the course record set in 2010 and the fastest ever by a U.S. runner.

The Boston course is considered ineligible for a world records because it has a net 432-foot elevation drop between the start in Hopkinton and the finish. However, it does have the famed "Heartbreak Hill" to contend with.

"I don't care if it is considered a record," Hall told NBC Universal Sports at the end of the race. "All I know is that I am a 2:04 marathoner, and that is something I will be proud of for the rest of my career."

On a day of historic races, the performances of Davila and Hall made it a watershed day for U.S. running.

goucher.JPGView full sizeAssociated PressPortland's Kara Goucher finished 9 seconds behind the winner.
Goucher was disappointed that she was unable to stick with the leaders when the pack began to split apart around mile 14. After fading back to ninth, she kept her head in the race and competed to the finish.

There was certainly no reason for regret. Goucher ran faster overall than she did in 2009 when she placed third and was nine seconds behind the winner.

"Desiree showed that an American is going to win this race, and I just want to be up there with her," Goucher said.

Davila, 27, is a former Arizona State runner who trains with the Hansons-Brooks Distance Project in Rochester Hills, Mich. She tried several times in the final miles to pull away from Kilel and Sharon Cherop but she couldn't break free of them.

Cherop faded back and then it was a battle between Davila and Kilel.

"It was the most incredible experience in my running career," Davila said on the telecast at the finish line.

Davila was tying to become the first U.S. woman to win in Boston since Lisa Rainsberger in 1985.

Of course, Goucher was hoping for the same thing.

The Oregon Project runner came into the race feeling as though she had put in the best 18 weeks of training of her life. But getting in position to compete for the marathon title she covets most was a steep hill to climb.

"The bar was raised today and I wasn't ready for them," she said. "I knew Desiree was ready for something good. She executed her race plan perfectly."

Goucher ran 1 hour, 14 minutes in the New York City Half Marathon last month. On Monday she ran back to back half marathons in 1:12.

"It's a reflection of how fast she's come in six months," Salazar said.

Goucher's finish did qualify her for the U.S. Olympic Trials marathon next January. She will take a short rest and begin training for the U.S. Track and Field Championships in June at Hayward Field with an eye on making the national team in the 10,000 meters.

Early in the race, New Zealand native Kim Smith set a scorching pace and built as much as a minute lead on the field. She led for an hour and 41 minutes before faltering badly and watching the chase pack swallow up her advantage and move past her.

congrats to Kara Goucher for getting 5th :)