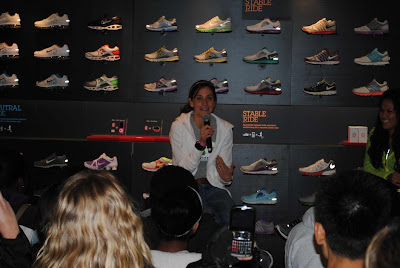 This morning Boston Marathon favorite Kara Goucher visited Niketown to discuss her upcoming race and second attempt to capture the Boston Marathon title. She is one of the favorites to win Monday's race, and the top American female runner in the field. She last ran the race in 2009, when she finished in 3rd place - just 9 seconds behind the winner.

Goucher talked about her excitement leading up to the race and how she's preparing for 2011 differently then she approached 2009. While she faced a lot of pressure last time to win the race, she's chosen "free" as her power word this year, in order to free herself from all pressure and limitations. This will be her second major race since giving birth to her first child, as she ran the New York City Half Marathon on March 20, finishing 3rd overall.
Advertisement

Goucher comes into Boston with plenty of experience under her belt. In 2009 she proved that she knew the Boston Marathon course better then any other elite runner. She's also an Olympic Track & Field athlete and has had numerous championship wins. Her husband, Adam Goucher, is also a competitive runner, and won the NCAA Cross-Country Championships while attending the University of Colorado, which is where he and Kara met.

Goucher talked to a packed crowd at Niketown this morning for about 20 minutes. She looked relaxed and in good spirits, and will do her best to be the first American to win the Boston Marathon since Lisa Larsen Weidenbach finished first in 1985.
Posted by Recovox at 4:38 PM

Need To Boost Your ClickBank Banner Traffic And Commissions?