Winners and losers from Paris-Roubaix 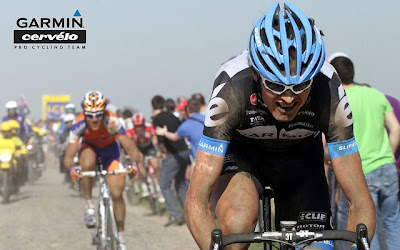 On the biggest of stages and with mounting pressure, Garmin-Cervélo finally delivered in the Classics. Criticised throughout the spring for their poor form, they were everything a Classics team should be on Sunday: strong, confident, reactionary, always on the front foot in numbers.

Aware that they would have been outgunned in a straight fight between Cancellara and any one of their leaders they launched Van Summeren – a top ten rider in the past – up the road, isolating Cancellara from his team and rightfully not working with the favourite once he attempted to stamp his authority on the race.

On a side note, in Sep Vanmarcke they have one of the brightest Classics riders of the future.

Laughed at when he turned pro for Le Groupement in 1995 for being overweight and out of shape, Guesdon has risen to become one of the most respected professionals of his generation. Since 1997 he’s been part of Madiot’s FDJ team and his Roubaix win that year remains the last time a Frenchman won the race. At 39 and with his career almost over, very few would have begrudged him another chance to enter the velodrome with a chance of victory. In the break that included Van Summeren and looking strong, an untimely puncture saw him fall away.

It’s not a customary sight to see Greipel in a group containing Fabian Cancellara with 40km to go in Paris Roubaix but that’s exactly what we were treated to on Sunday. In fairness Greipel was going backwards at the time but his work in the break and final placing of 21st in a group containing Baden Cooke and Manuel Quinziato deserves much credit. He showed in De Panne that he’s more than just a sprinter and while he still loses more sprints than he wins, he comes out of Roubaix as one of Omega Pharma-Lotto’s better signings.

Putting the debate over whether he was as strong as last year to one side, there’s little argument that Cancellara was still the strongest rider within the bunch throughout the spring and any rider bar only himself would have accepted second in San Remo and Roubaix and third in Flanders at the start of the season.

Away from the heat of the battle and in summary of his spring, Cancellara’s biggest error was undoubtedly his performance in E3. It sounds perverse but did he need to show his hand that early, did he need to demonstrate such dominance in a race of mediocre importance? From that moment on, he moved from being Cancellara the favourite to being Superman, and every team, every rival, based their tactics not perhaps on their strengths but on his weaknesses.

Yet it’s still hard to be critical of a rider who was essentially riding as a one-man team. The CN staff joked about letting him ride the TTT at this year’s Tour de France by himself this July. We stopped laughing once we realised he could actually win.

Three riders in the top twenty in Roubaix and Cavendish’s win in Scheldeprijs means they once again have outdone themselves and punched above their weight. Stapleton was present for Roubaix and continues his search for future sponsors, but his team’s placings and Goss’s fine win in San Remo will make things far easier.

Van Summeren was not listed anywhere near the favourites for Sunday and in many ways his win was a bigger shock than Goss in San Remo and Nuyens in Flanders.

However, his win and immediate proposal to his long term girlfriend at the finish brought down the curtain on what has widely been accepted as a thrilling spring.

The cracks were already there as far back in Gent-Wevelgem when, despite Daniele Bennati’s second place, the team failed to have another finisher. Decimated in Flanders, they were again off the pace in Roubaix with Cancellara’s first and only helper home nearly 14 minutes after Van Summeren. All theoretical of course but Saxo Bank – his previous team - managed five riders in the top 70 at Roubaix. The Ardennes will see a stronger set of riders line up for Nygaard, but Cancellara deserved better support on Sunday.

Still no Roubaix win for the American manufacturer who watched on as Cervélo took their third win on Sunday. Specialized are also on three, having won from 2008 through to 2010. Still, Trek has last year’s Tour win… oh.

Dire sums up their entire Classics campaign perfectly. Their best result came in San Remo with Pozzato taking an unpopular fifth and from there it went from bad to worse with Tchmil and Pozzato bringing their dislike for one another into the press. On Sunday they hit possibly the lowest moment in the team’s short history with no finishers. Even their team car failed to finish, puncturing on the course.

Last year Allesandro Ballan was pulled from racing on the eve of Paris Roubaix and had this to say on the matter: “It was a decision on the team’s part that I respect because at the end of the day they had to protect themselves in order to take part in races, because we weren’t in the ProTour,” he said. “A team like Lampre didn’t have that problem so they didn’t stop their riders.”

Twelve months on and this time BMC refused to budge, allowing the Italian to race despite mounting pressure and accusations from Italy. The investigation will move along within the next few weeks, and while it must be stressed that Ballan is innocent until proven otherwise and free to race, BMC’s move was a low moment for the UCI’s importance on ethical standings.
Posted by Recovox at 10:10 AM