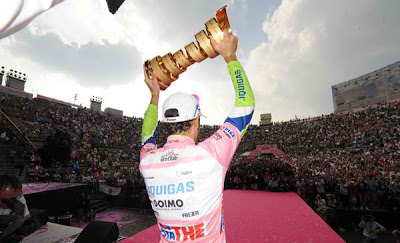 Ivan Basso has officially announced that he will not ride the 2011 Giro d'Italia, that starts May 7 in Torino. The defending champion of the 'maglia rosa' had previously indicated that he may have ridden in support of his Liquigas-Cannondale teammate Vincenzo Nibali - but he has now confirmed that he will focus entirely on preparing for the Tour de France.

On his personal website, Basso said that "the objective at the beginning of the season was to ride the Giro before the Tour de France, in order to help Vincenzo Nibali in his quest of the pink jersey. But at the moment, I don't have the physical condition to fulfill my role as he would deserve it."

Basso has been struggling with illness recently. He pulled out of the Vuelta al Pais Vasco and has not raced for two weeks. bike. He is now recovering, as he told us before the Flèche Wallonne.

"Until now, I have been trying to find the sensations on the bike that would give me my back my confidence. But it was in vain. Together with my team, we have thus taken this painful decision. To me, it's a great sacrifice not to race the Giro."

"To have Ivan at the start would have given Vincenzo a great contribution of experience, but the conditions do not allow it. In order not to take any risks in view of his preparation for the Tour de France, this is the best decision. We will honour the Giro as we have always done, with Vincenzo and co. looking to equal Ivan's feat and give us a new, immense satisfaction," Amadio said in a press release.

Basso will now fully focus to building up his form for this year's Tour de France. However, he promised his 'tifosi' to be back on Italian roads to try for a third Giro d'Italia title after in the future.

"The idea of winning a third pink jersey before the end of my career is an obsession," he concluded.
Posted by Recovox at 8:08 AM