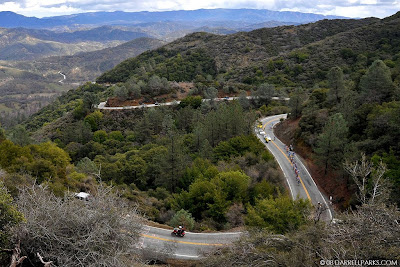 The 2011 Amgen Tour of California is shaping up to be the hardest edition to date, featuring more climbing than ever and not one, but two true mountain top stage finishes. Cyclingnews visited the relatively short but seriously difficult course for stage four from Livermore to San José's Sierra Road with local professional Roman Kilun of the Kenda/5 Hour Energy p/b Geargrinder team to witness first hand what the 131.6 km stage will present to the peloton on May 18.

Sierra Road, a 5.6km beast of an ascent, averaging 9.4 per cent is the only climb which has featured in every edition of the Tour of California, and it has been granted the honour of becoming the race's first true mountain top finish. The second, higher hilltop stage finale will come three days later on Mt. Baldy.

Riders may be focused on the latter, but according to Kilun they should not underestimate the Sierra Road stage with its warm-up climb up Mt. Hamilton.

"This is a proper climb," Kilun said after we'd been heading up Mt. Hamilton for 20 minutes and hadn't even caught sight of the top. Granted, he'd already dropped me and doubled back three times along the way. "I'd forgotten how long this is."

The roads of the 131.6km stage have been well used in the Tour of California. The start in Livermore is new, but the race has passed through the town in 2007, 2009 and 2010, and the route out of town will be familiar to those who took part in last year's race.

Mines Road, a remote back-country byway popular with motorcyclists and bicyclists alike, will take the peloton from its lap around the Lawrence Livermore Labs in town and head straight toward the Mt. Hamilton climb.

With less than 100km from the start to the Lick Observatory at the top, Kilun thinks it will be hard for a breakaway to establish itself.

It would take a concerted effort, to be sure. Civilization falls away soon after turning from Tesla Road onto Mines as the race heads through Livermore Valley wine country - one of California's lesser known appellations, but an area of viticulture which pre-dates the more famous Napa Valley.

As we take a sharp left that separates Mines from Del Valle road, the startling silence is quickly filled with my labored breathing on an unclassified ascent that twists and turns up from the valley floor. It will be the perfect spot for Livermore labs nuclear physicists to sneak away for a quick glimpse of the race's drama, as the climb will surely be the launching pad for the day's breakaway: it is almost 3km of serious climbing and 300m altitude gained.

What follows is an unyielding false flat that continues until the midpoint of the stage. The course is broken up by only a couple quick descents, which undo several hundred meters of climbing, setting up even more elevation to be gained to the top of Mt. Hamilton.

When the Tour of California came this way in 2008, it headed from Del Puerto Canyon Road from the east to Mt. Hamilton. We reach the intersection just before the halfway point, and Kilun instantly recalls that day just over three years ago.

"I was really sick with the flu, and all I can remember is sitting behind Fabian Cancellara heading down this road and looking down at my computer and seeing 40mph. We were just flying - and as soon as we hit the climb the race just exploded."

That year the peloton reduced a nearly five minute gap to the breakaway to 20 seconds on the approach to the climb, and Kilun speculates that if any breakaway goes clear early in the stage, there isn't enough time or distance to gain a significant enough amount of time to stay away on Mt. Hamilton.

"It's a proper climb"

We pass over a lovely little bridge and I'm so distracted by a bovine that's the size of a truck, staring languidly at us as we pass, that I fail to notice that the mountain is right in front of my nose. The climb begins suddenly and for more than four miles it hardly relents. It's not long before the conversation becomes entirely one-sided, as I try to hide the fact that I'm over the red line as Kilun chats away at a seemingly comfortable tempo.

This climb is, in fact, nearly the same in distance as Mt. Baldy and only slightly less steep - averaging 8.4 per cent as opposed to 8.9 per cent. It is, as Kilun reiterates, a real climb - a climber's climb.

"I'm not sure the GC will be won on this stage, but the person who wins the overall won't lose any time on this stage. You might see a group of GC contenders finish together but not necessarily win the stage," he predicts.

It is indeed a real climb - a really painful climb - and it's not long before Kilun's 39x25 isn't low enough to go as slow as I'm crawling along, and he darts up ahead up a few switchbacks before coasting back down so we can ride side by side toward the camera.

After a few extra-steep pitches in the switchbacks followed by another steady grind, the road gets narrower and begins to level off for a brief respite before kicking up once more in the final kilometer.

We've climbed up to over 1000m in elevation and we're closing in on the clouds that often hug the top of this mountain, but we can still take in the view of the valley below, a red-tailed hawk sailing on a thermal, and the twisted, lichen-covered live oaks that dot the mountain side.

Just one more pitch and the Lick Observatory comes into full view with its great, white domes, signalling the end of the climb. It's taken Kilun just over 35 minutes with his bonus kilometer or so, and let's not go into how I actually got to the top... In the race, suffice to say, the leaders will crest this climb a good 10 minutes faster.

"There was a lot more pedalling involved than I remembered"

What follows Lick Observatory on paper is a 30km descent that stair-steps its way down the Diablo Range down toward the Santa Clara Valley below. While the road is frightfully narrow, rough, and strewn with rocks that tumble from the hillside at times, the grade is relatively gentle on the way down.

Built in 1875, Mt. Hamilton Road had to be flat enough to allow for horse-drawn wagons, so it lacks the white-knuckle steepness of the side we just climbed.

When the wind blows up from the valley, it actually takes a bit more work to get down the hill than you'd expect. Throw in two minor climbs that break up the plunge to the bottom, and you've got a chance for the race situation to change before the start of Sierra Road.

"There was a lot more pedalling involved than I remembered," Kilun says as we reach the bottom. That isn't to say there are fast sections which take a good deal of skill and nerve.

The descent has been labelled 'treacherous' and 'dangerous', but Kilun says it is only as bad as you want to make it. "For sure there will be some guy who thinks he can bridge a gap to the leaders on this descent, and if someone take one too many risks, I don't doubt they will go down."

Once we reach the bottom, it's only a few kilometers before the course takes a sharp right and the Sierra Road climb is staring us down - a veritable wall at the start which the entire peloton should be familiar with: they've seen this view each year since 2006 - either at the start of the stage in 2009 and 2010 or at the tail end in 2006, 2007 and 2008.

What they won't have seen is the absolute madhouse that this hill is going to be when it hosts the race's first mountain top finish.

All along the climb, which averages a excruciating 9.5 per cent, is 5.8km in length and rises almost 550m, there will be mass hysteria as fans run alongside their heroes as they battle for seconds on this ascent.

On our ride, those deafening cheers are replaced by the wind as it whooshes through the eucalyptus trees. I've raced up this climb before and am well familiar with the agony.

The switchbacks are steeper than Mt. Hamilton, and with the climb on the windward side of the range, the gusts can be unsettling as you traverse the wide-open stretches that tower above San José.

As we near the top, the extravagant homes that dot the lower slopes are replaced by green fields and groups of cows lazing in the sun. There's one short descent that is over far too quickly before the final push to the line.

Trees behind us, we're faced with rolling green hillside and an amazingly beautiful views of the wilderness to the east, and we stop to admire the scenery and ponder what this area will look like come race day. It takes an average racer nearly half an hour to reach the summit of Sierra Road, but the climbers in the Amgen Tour of California will most likely crack the 20 minute mark.

No doubt, the hillside will be packed with fans, and the road will be strewn with exhausted racers who will have given their all to tackle this short but intense stage.
Posted by Recovox at 3:20 PM