Mark Cavendish realistic about his chances in gruelling 2011 Giro d'Italia 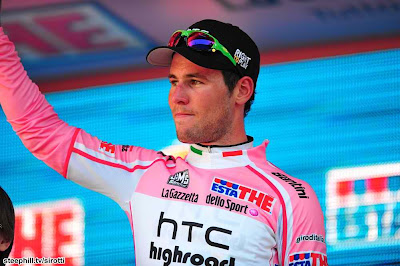 Mark Cavendish posted a picture of the profile of this year's Giro d'Italia on his Twitter feed on Friday with a suitably pithy comment. He had good reason: of the 21 stages only five are without a major climb, where he will be able to use his sprinting skills to the full as he attempts to add to his career tally of five stage wins in the first major tour of the cycling year.

"It's one of the toughest Tours of Italy ever and I don't want to ride myself into a box before the Tour de France," Cavendish said this week. "I'll have to take every stage as it comes. For me, as in every grand tour, my goal is to take at least one stage win, because if you don't you've failed."

Today's time trial ending in Turin will suit Cavendish and his HTC team, but what follows is the hardest Giro in recent years, with eight mountain-top finishes. The route looks ideal for the triple Tour de France winner Alberto Contador, who intends to attempt a rare double of Giro and Tour wins this year, but, with a final decision over his positive test for clenbuterol expected at the court of arbitration for sport in June, this Giro could end up being decided by the lawyers.

It would be a surprise if Cavendish is still at the Giro for the mountainous final week. The last stage he can target is in Ravenna, 10 days from the finish and he is down to race the Tour of Switzerland, Tour de France and Tour of Spain later this season. The chances are he will call time on the Giro before the final showdown, but before then he will have to seize his chances.

The Manxman has won only two races so far this season – although one was the prestigious Scheldeprijs in Belgium – and he needs more. A decent Giro will propel him towards the Tour de France in confident mood. As he said this week: "If you're creeping here in May, you won't be flying in July."

The Giro and Tour are more important than ever for Cavendish this year, as he needs to push Great Britain up the world rankings before the end of July, to qualify a full team for the World Championships in Copenhagen in September.

Cavendish, 25, will have a rare chance to win that world title, as the circuit is unusually flat, but he will need as many Britons at his side as possible to help him do so. Additionally, he will sign a new contract at the end of this season, with the chase for his services currently led by Team Sky and the Americans BMC. As he acknowledged earlier this year, the deal he signs this season will probably be the biggest of his career.

Cavendish will, however, not be the only Briton targeting the sprint stages. Adam Blythe, the 21-year-old Yorkshireman tipped as "the next Cavendish" after landing four wins late last year, starts the Giro for the second time after coming close to winning a stage last year, and should be at Cavendish's shoulders in the final hectic metres after Sunday's flat marathon to Parma.

While the evergreen David Millar could figure in either the final time trial or the hillier stages, two Britons at different ends of the age spectrum make their major Tour debuts, both with Team Sky.

Cavendish's fellow Manxman Peter Kennaugh is only 21, and has been tipped as a potential stage race star, while the Yorkshireman Russell Downing, 11 years his senior, has been waiting for this opportunity since Kennaugh, Blythe and Cavendish were still at school.