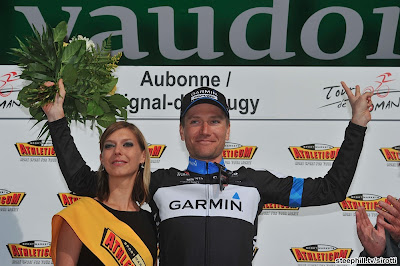 When I was selected by the team for the Tour de Romandie my immediate thought was of the 2007 edition. That year was my first visit to the Swiss stage race and we wondered all week long where the heck the sun was. I don’t mind a little rain but a week of racing in it can get on your nerves. Well this year we would see some of the wet stuff but it would also prove to be a lot nicer than in my first go-round.

It’s important to me who I room with as those resting periods between stages are important for decompression. Being able to fully relax before the next race is essential to having a good day on the bike. This season I’ve had several excellent opportunities to get to know many of my new or newer teammates and that’s worked well. For Romandie I roomed with the Aussie Jack Bobridge all week.

Jack’s a good dude and it was fun to get to know him. He’s the world record holder for the 4K Individual Pursuit and obviously a real talent. Jacky jumped in a long bomb breakaway the first day (no one’s going to say the kid doesn’t have guts). The break made it to the line and Jack just missed the podium with a fourth place finish. He was pretty cooked after that, but still jumped in the break the last day to try and win the points jersey. Things did not go his way with that but the team rode really strong all week.

Garmin-Cervelo won the Team GC, best young rider for Andrew Talansky (with Peter Stetina in 2nd place), two riders in the top 10 (Talansky and Millar), and a stage win by yours truly.

The day before the Time Trial my legs finally opened up and I knew I would be able to go deep. The body can be a funny and finicky machine for professional cyclists. I for one am so sensitive to how I’m feeling that when the legs are off I know it before I ever pedal. And when the legs are right, really right, I can feel that as well, often before I even hit the saddle. Knowing that my legs were with me gave me the added confidence for the TT.

I had also just tweaked my position on the bike looking to fine tune my breathing, comfort and pedal stroke, all of which allowed me to feel a lot more power on the bike. Upon driving the course for a little recon I got pretty excited. The course suited me, it suited me well. I knew it and somehow, and don’t ask me how, so did my legs. When it was go time, I went out super fast. I was going to push it and the body accepted that and responded. I had a good carrot in front of me in the form of Vladimir Karpets. He’s a strong rider but I really wanted to catch him and while that would only happen in the last 500 meters of the 20 kilometer course it was just what I needed.

I crossed the line and felt that the effort had paid off. While there were still many riders to go my time was best of the day, so far. At the finish there were a few people from my high school in Utah with their families. That was a nice surprise and boosted my morale even further. I rode back to the start area and found the guys in the bus watching the race on TV. They looked quite happy for me and told me I should go back to the finish because no one was going to beat my time. I lingered a while until it really looked like that would be the case and then I headed back to the finish for the podium. Obviously it felt really good to get a win, especially at a big event, and it helped cement the great week the team had overall.

Now I’m back in California for you know what. The Amgen Tour is close to the heart for me. I like this race and I like to do well here. I appreciate the support I get out on the course in my new adopted home state. The overall fan support that the Amgen Tour gets is awesome, and it means a lot to the riders, and especially to yours truly.
Posted by Recovox at 12:11 PM