Garmin-Cervélo Fans at the 2011 TOC 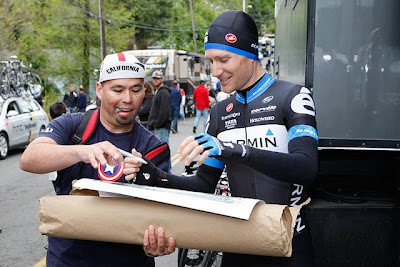 Nevada City is a gloriously picturesque Sierra Nevada foothills mining town. And it is here, outside the Garmin-Cervélo bus where the riders are inside having a pre-race meeting ahead of the day’s Tour of California stage, that we take time to chat with a trio of argyle fans.

Chris Blancett and Regina Molina are from nearby Santa Clara in the Silicon Valley, while their friend Tim Ackley had come down from Portland, Oregon to watch the racing.

Blancett, who wears a Dave Zabriskie Captain America t-shirt, says they need DZ’s signature along with that of Dan Martin and Andrew Talansky to make their posters complete and frame-worthy.

What is it about the Garmin-Cervélo team that attracts these fans?

Gesturing in toward the gleaming black bus, Blancett says “I like them because Dave Zabriskie brings a fun, young humor to cycling that I find really refreshing and really entertaining.”

“The other day we were all just hanging out looking at the bus and Ryder opens up the window and starts handing us posters and signing them. They are a really cool group of guys. They are just young and fresh. And as a new cycling fan I can get into their team.”

Blancett also says he likes how they race. “I like how tough they ride.”

The team fills a void these fans say Lance Armstrong left when he retired. Blancett explains: “Since Lance is leaving, it makes you feel like, ‘Who am I going to love?’”

Blancett says he also follows baseball and he used to follow a lot of other sports. But now, “cycling took over.”

Cycling’s small graces appeal to him. “One of my favorite things to see in the peloton is a guy put his hand on the back of another guy because he’s rolling up on him. And when something happens they just slow down. There are a lot of moral things going on.”

We turn to Molina, who is wearing a fire-engine red shirt that reads “Tour of California” in giant white typeface across the front. Why is she a fan? “I got into cycling because of my boyfriend. About a year and a half ago.”

Asked what she likes about the Garmin-Cervélo team, Regina confesses to a crack in her argyle-fandom: “I like George Hincapie because he’s so good looking. I know he’s not on Garmin, but I also like Zabriskie. I use Bliss for women.” (DZ Nuts’ chamois cream for females.)

Now Regina takes a surprising turn for someone who just got into cycling: “I like downhilling. Chris doesn’t like it, but I like the fast pace of it.”

Ackley, who has been busy taking photos of all of us with his Nikon, chimes in. He points out that he’s from Portland, “the cyclocross mecca of the Pacific Northwest.” He went to France in 2006 to watch Paris-Roubaix. “That was a good time.”

He says he enjoys the deep history grounding European races like the Hell of the North. “Everything is so put together. They meet at the same square where they’ve been meeting for the last 50 years to start out.”

“You know,” Ackley says, “cycling is one of those sports where you can go up to the riders and get autographs and get pictures, where a lot of American sports you can’t. They just blow you off. That’s another reason why I love cycling and following this team.”
Posted by Recovox at 11:32 AM