DZ - The Amgen Tour of California 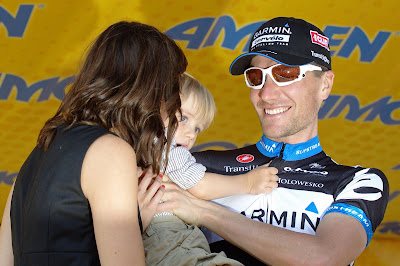 Well the ATOC has come and gone. The lead-up to the race is anxious. The training methodical. The review of the course, the team selection and strategy are all a very deliberate process. And then, literally, in the blur of a week its over. Because a week like this is so intense it goes by much faster than when we’re not racing.

The start in Tahoe couldn’t have gone any worse for a bike race. Regardless of how it may have looked on TV, let me tell you it was a true winter snow storm. It would have been impossible to race in those conditions and I’m not shy in saying that I was happy that the stage was cancelled. There would have been carnage on the road, a crazy spectacle that would not have been the proper start to typically beautiful stage race.

But even the 2nd stage wouldn’t go unaffected. They had to shorten the 2nd stage because of the storm, but it was good that the race organizers made the decision early and everyone involved made it happen from Nevada City. It felt good to get the race going.We were all a bit pent up and ready to roll. I felt physically well and mentally prepared for the week. But when I lost some time on the circuits in Sacramento I’d have to say I wasn’t entirely pleased. I lost more time on the summit finish on Sierra road. My climbing legs just aren’t ‘on’ yet. But I don’t think anyone in the world was going to beat Chris Horner on that day, or for the overall in this year’s race. He was and is in amazing form.

Surprisingly, I didn’t feel like I had good legs for the time trial when I started my ride on the now familiar Solvang TT course. When I started I had my doubts right away. The legs were firing but I simply wasn’t convinced that I was truly at my strongest. But there are times when the body isn’t cooperating that you have to erase the doubt for yourself, shut out the negative thoughts and simply, purely, undoubtedly, motor on. I knew I wanted to fight for this win in Solvang, so that’s exactly what I did. And I would keep on fighting right through the finish line. But I have to tell, in a moment that even surprised me, as I took the final turn into the finishing straight, in a moment of total exaltation, I let out a huge roar. I can’t say I’ve done that before, but it felt good and strangely, it felt right.

And let me tell you it was a great feeling to get the win. But there were quite a few riders between my finish and Chris Horner, the last rider to leave the start ramp. I waited with anxious anticipation to see how some of the others would do, even strolling through the finish area to watch some of the riders on the jumbo screen that was set up there. It was fun to be among all the friendly fans. It was a treat for me to bring my boy up on the podium and as a treat to him, one that he’ll appreciate much more years from now, I had the podium girls kiss his cheeks rather than mine. On that day, at least at that moment, I think we both took the win.

Well what can I say about the big mountain stage? Mt. Baldy was simply everything I thought it would be, a very hard stage. The team did well there and put some pressure on the race but in the end Horner and Levi were too strong. But Tommy D. hung in there with the leaders and his ride up Baldy would help secure him a 3rd place spot on the podium. I was happy for him.

The team stayed downtown Saturday evening. I ended up relaxing at a Starbucks near the Staples Center for about 3 hours after the Baldy stage just soaking in all the ‘America’ I could. I’m away too often and those Americana moments maybe mean more to me than most others. I even splurged and drank something called a, mocha coconut frappuccino. Come on! Who comes up with this stuff? Well they’re welcome over at my house, because, damn, that was pretty tasty. Truth is, that’s not the type of indulgence that I typically allow myself, and it won’t be happening again anytime soon, but it was a real nice treat after the punishment of doing Baldy at race pace. Afterwards, I ran into the very likable Burke Swindlehurst, and we caught up for awhile, and quite excitedly made mountain bike plans for the off-season. I look forward to tearing up the dirt with that dude.

Riding Stage 8 into Thousand Oaks was super cool for me. I kept thinking to myself, I’m home. I know these roads and I’m happy to be racing here. The crowds were amazing. I guess I just wasn’t expecting there to be as many folks at the finish area as there were. And it was great to see so many of my friends, old and new, come out to the race. I wanted to take a few flyers off the front of the peloton for the home crowd but the course wasn’t very conducive for that, or, maybe I was just at my limit after a rather tough week. But it was all good nonetheless. And regardless of what some other riders may say, I could hear you and I can tell you that I appreciated all the shout-outs.

As we did last year, our guys won the team competition. It’s always nice to get back up on that podium to celebrate. And as they should, our celebrations always include a bit of champagne. Now I can’t say exactly what comes over me when I’m given the big bottle but much like the incredible Hulk goes through his transformation, well so do I. Except I’m not angry, quite the opposite. I’m celebrating and that means I’ve got to spray champagne all over the place, including a significant dousing of those innocent podium girls. Those girls in their high heels are slow on their feet and no match for an old pro like myself. They’re getting wet or I’m going for a second bottle. I even tried to sneak a squeeze bottle of ketchup up onto the podium just in case I ran out of champagne. But the team’s PR person is on to me and my crazy humor and frisked me before I went on stage and took the ketchup away. Now that would have been quite the scene.

We had our Sunday night team meal at one of my favorite local restaurants. It was fun to share a little local flavor with the guys and to reflect back on the week and to toast our collective team effort. Everyone was in a good mood and it was fun to wind down afterward with the guys.

Well, I know it’s sudden, but I really can’t wait for this race next year….but please, no snow.
Posted by Recovox at 10:06 AM