DZ time trials to stage win ahead of Leipheimer 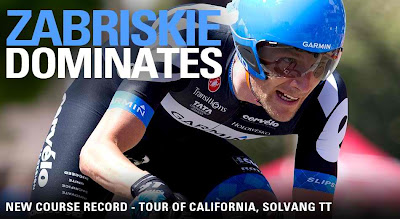 David Zabriskie made up for his disastrous day on Sierra Road by crushing the Solvang time trial in a new course record. The Garmin-Cervélo man who was second overall in last year's race boosted his team's fortunes with the stage 6 victory, topping Levi Leipeimer (RadioShack) by 26 seconds and best young rider Tejay Van Garderen (HTC-Highroad) by 40.

It's the first time trial stage win for Zabriskie here in California. His only other stage victory in the Amgen Tour came last year in the stage from San Francisco to Santa Cruz, where he bested Michael Rogers and Leipheimer with a crafty attack in the final 500m.

"I knew the last stretch was a headwind and I had to go hard there. I didn't feel like I was super strong, but it was a good ride," Zabriskie said. "Today was obviously the best I've ever done here. I had no radio, just did my own thing and it worked."

The stage win was sweet revenge after his general classification hopes were dashed when he couldn't follow the RadioShack riders on the stage 4 finishing climb. "The time trial is my strong suit, and I wanted to have a good ride and have some salvation.

Zabriskie explained what was different today. "A time trial is a different position on the bike. I can cheat the elements a little - I'm good at that. On a climb you need constant pressure on the pedals and sometimes my body gives out on a climb like that, when everyone's going really really hard."

For the three previous visits to Solvang, it's been Leipheimer who has dominated the Danish-themed town's stage, but despite setting the fastest intermediate split, he couldn't hold his effort to the line to take his fourth stage here.

When he learned he had fallen shy of the stage win, Leipheimer angrily pounded on his bars and rode away, not speaking with the press. When he did return, the American offered no excuses for his ride and instead praised the performance of Zabriskie.

Leipheimer also dismissed comparisons of today’s record breaking ride with his own previous rides in Solvang.

"[It’s different now that] we're in May, the roads have been repaved; I think the winds were a little more favourable. I think whoever won today was going to set the course record,” the American said.

RadioShack teammate Chris Horner held his own on the course, finishing sixth, only losing 36 seconds to Leipheimer – enough to keep him comfortably in the race lead going into tomorrow’s difficult Mt Baldy stage.

"I knew I was going to have to suffer as part of the job. So far the team has done all the work, and today was the most work I had to do in the whole Amgen Tour of California," Horner said.

"Today was about damage control. I knew I would lose a little bit of time, but I was confident to hold the jersey."

"It was all about keeping the bike upright, hitting the times out on course and then letting it all hang out in the final 2km."

The battle for the final overall podium heated up, with UnitedHealthcare's Rory Sutherland putting in a strong performance to steal back two seconds on Garmin-Cervélo's Christian Vande Velde to leapfrog the American. Tom Danielson (Garmin-Cervélo), was also surpassed by Sutherland.

"I think that you can see from the times from the finish that the wind changed today and got harder later on," said Sutherland. "The guys who were in the top five positions, Tejay did a really good time at the end and Levi. The times of the last guys were higher than what would be expected.

"I thought it would be a little bit closer time-wise but the guys around me were the guys that were around me at the start. It wasn’t the most fun time trial that I have ever done. It was incredibly headwind-y."

The outcome of today's stage puts the Garmin-Cervélo even more on the defensive as they try to chase a podium position as well as unseat the RadioShack duo.

"Vande Velde was on good form to make a good result in the time trial today," said manager Jonathan Vaughters. "We're definitely the underdogs for the next few days. Tomorrow, there will be fireworks. we'll put on a show tomorrow, I mean, you know, it's going to be tough. Horner is really strong right now."

In the best young rider competition, Tejay Van Garderen (HTC-Highroad) put in an impressive performance to take third on the stage, extending his lead in the classification over Peter Sagan (Liquigas-Cannondale).

"I'm definitely happy with how the race is going," said Van Garderen. "I made some tactical errors on Sierra Road. I tried too hard to stay with Horner and faded, I should have stayed within myself."

"[But] The team's proud of me. I would have hoped to be higher on GC than I am, but when Horner's on the form he's on, even [Alberto] Contador couldn't have beaten him on Sierra Road."