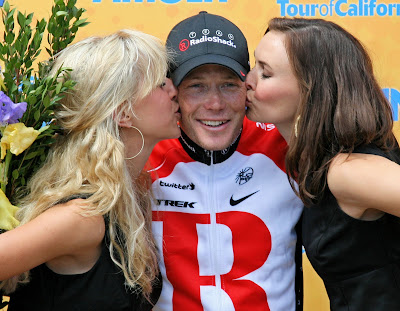 At 136 miles long, stage 5 was going to be hard stage for sure, but when we let eleven strong riders slip away, it suddenly became one for the books. The stage started and road went uphill from mile zero, but this helped us out a bit as the attacks were a little easier to control on the climb. Somewhere, very early into the stage, four riders got away, and we were quite happy to let them go. The breakaway included Dan Martins, who was sitting in 12th in the overall standings. That meant two things – one, the fact that he was so close in the general classification would make us have to chase all the day, and two, he would be stuck working in a break all day. We were hoping that the extra effort he would be putting in would mean that he would be wrecked in the coming days, and would no longer be threat to us in the stages still to come. If so, it would eliminate one more Garmin rider, which has many threats in the overall standings, from the list. The only problem with that plan came about ten miles later, when we let seven others get away. Suddenly, we were chasing eleven riders, as all the breakaway riders came together to form one large unit.

However, luckily for us, Team Liquigas was still hunting for a stage win for their number one sprinter, Peter Sagen, so about 50 miles into the stage, they started to pull with us on the front. Most of the stage had a strong cross/tail wind that left no one on vacation! With speeds on the flats reaching 30 to 40 mph, the peloton was strung out for hours, and crashes continued to hit through out stage as riders fought to stay near the front and for any wind protection they could find.

Levi and I certainly had two of the few 1st class seats available, as the RadioShack train in front of us always left enough space on the side to keep us protected from the wind. I also saw that Peter Sagen’s team was giving him the same rock star treatment, but he was one of the few lucky ones. For most of the other riders, it was fight or sink in back of the peloton, with the unlucky ones finishing their day at the hospital under the x-ray machine - a hard day for sure.

When we had about 6 miles to go to the finish, the sprinter teams passed Levi and I, with HTC taking over at the front. The last of the breakaway riders were being swept up, and I began to think that the stage was about over – and with it any threat to my GC lead for the day – or so I thought! We had one more small climb to get over, but because of how tired every one was at that point, the extra effort put a big split into the peloton about 15 riders back from the front. Levi and I were at least twenty guys behind the split when it happened, and there was immediately a gap of at least 15 meters opening up between the two groups. But, Levi wasted no time. With me on his wheel and Bushe on mine, he closed the gap in seconds. That will be last time I let myself drift that far behind again, though, since I’d rather go down fighting with the sprinters, then to lose the overall because I let my guard down behind them.

The sprint was hard to predict, since none of the sprinters had their full team left to do a lead out for them. The speed of the group just before the finish line was up and down as the lead out men would die after just a little time on the front without anyone to take their place. This yo-yoing had us going from left to right and all over the road, with attacks coming from the non-sprinter teams trying a last ditch effort to slip away and win the stage. But, just before they could get any sizable gap, another lead out rider would come to the front for one last pull, just barely keeping it all together.

When the sprint finally started, I was on the limit, sitting on very tip of my saddle, searching for any extra speed I could find to make sure that no gaps opened up in front of me before the line. Luckily for me, there were one or two sprinters behind me that came around and closed the gap, which, even going full gas on the tip of saddle, I couldn't keep from opening in front of me. The day was done and so was the peloton – time for someone to flip us over!

Another day of the 2011 Amgen Tour of California is now in the books, so it is time to find some food and start recovering for the big time trial in Solvang tomorrow.

Thanks for reading. Until tomorrow…
Posted by Recovox at 11:26 PM