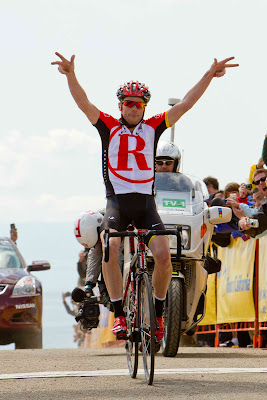 Wow, what a day! I’m going to have stories to talk about for the rest of my life. And sorry, but I only have time to tell you guys one or two, before it’s off to bed to get ready for some big days of racing coming up. The plan of the day was to drill it when we hit the Mt. Hamilton climb – an HC category climb close to the finish, but as the day started, I could feel that my legs were fantastic. With Levi in great form as well, the best plan was to drill the team on the front, string out the field, and try to destroy as many people as we could before the final climb up Sierra Road, a category 1 climb to the summit finish of the fourth stage of this year’s Tour of California.

We had the team power to drill the race all day long. It started off with Markel and our young, super neo-pro and US pro champion, Ben King. We did have some big help from the boys at Sky as well. Ben and Markel were to drill it 100% up every climb until we got to Mt. Hamilton.

From there, JMac was to take over, and make it as ugly as possible for anyone who didn’t have their climbing legs on them today. He pulled halfway up Mt. Hamilton, where Haimar took over. At that point, the field had been whittled down to 35-40 riders. After Haimar pulled off, Dimi took it to the summit, and upped the pace every time we came out of the corners. That was stringing the field out even more, and Levi and I were loving it, as we knew Sierra was just on the horizon.

Over the top, we hit a crazy descent. We were flying through the corners left and right, barely making it through a couple and blowing it hard on one. We hit a left hand corner with the brakes locked up going straight instead of left. Dimi and I just barely pulled out the corner, with Levi just behind doing everything he could, and Matthew Busche was trying out his cyclocross skills as he rode up the side of the mountain, in the dirt and grass before coming right back down onto the road. It was another one of those moments that almost cost you the race, but at the same time is exactly what makes it all so much fun. I yelled for Dimi to just keep going hard, as we had Ryder Hjesdal and Paul Mertens just up the road and gaining time on us. Dimi drove the pace and never gave anyone behind time to do anything – not eat, drink or even worry about just how crazy fast we were going. Shortly after the mishap corner, Haimar came back onto the front, and a few moments later, Busche was back on the front as well. We still had five guys up front as we finished the final descent.

Dimi and Haimar rode until their legs had nothing left, pulling off one kilometer before the final climb began. From there Busche took over, and drove us into the start of the Sierra climb. The second year pro had the pace pegged at the limit. With the wind coming from the side, left to right, I yelled for Busche to pull all the way to the right, leaving only enough space for Levi and I to get a draft. His job at this moment was to only drill it for the first 500 meters or so of the climb. Then, I wanted him to give one last acceleration before he pulled off and I took over.

With such a long descent, followed by the hard pace being set by Busche at the beginning, my legs felt like stone for the first few hundred meters or so, but after that they opened up and started to feel fantastic again.

Busche had my SRM file going off the chart, and I’ll post it later for everyone to see. After he was done, I took over on the front. We were super lucky on the climb, since the wind continued to be either a crosswind or tailwind. I left enough room just for Levi, while everyone else had to fend for themselves. When I looked back, it was just Levi and I off the front together, still chasing Ryder who was putting on a stellar show. As we caught Ryder, I put in one more big acceleration to try to make sure that he couldn’t jump on the wheel, and from there I was solo and going to the finish, with just over two miles to go to the summit. I glued my eyes to the SRM, keeping the rhythm steady and being very careful to never take it into the red.

At that point, you’re always wondering when you’re going to get caught, since I was still only holding a 20 second lead. It wasn’t until I heard from the moto that the time had gone up to a minute, that I felt certain the win was coming, and praying that I didn’t have any flat tires between there and the line.

Just before I hit the finish the line, the five weeks before the Tour of Cali started to go through my head – all the time and energy I had put in to arrive here with the form to produce today’s ride, as well as all the help I had received from family and friends to get to this moment. A special thanks to all of my fantastic teammates – Ben, Markel, JMac, Haimar, Dimi, Matthew, and Levi, for making the stage win and the yellow jersey possible.