No word from @juanpelota on when he'll race his first triathlon 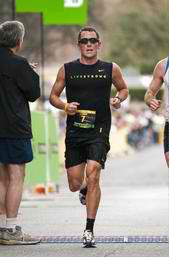 What's a seven-time Tour de France winner to do once he's hung up the bike?

Turn to triathlon, of course.

Lance Armstrong said early this year that the Santos Tour Down Under in Australia was his last competitive cycling event. Don't mistake that to mean he's done racing.

Based on tweets from Armstrong's triathlon-obsessed alter ego, @juanpelota, he's returning to his roots. ("Pelota," in case you were wondering, means "ball" in Spanish. We'll leave it to you to figure out the reference as it pertains to a testicular cancer survivor like Armstrong.)

Armstrong, who will turn 40 in September, was an accomplished swimmer by the time he was 12. He entered a junior triathlon on a whim, won, and four years later became a professional triathlete. In 1989 and 1990, he was the national sprint-course triathlon champion.

He eventually zeroed in on cycling, going on to win his first Tour in 1999. (He's also been dogged for years by allegations of doping, although none have been proved.)

Armstrong prefers to communicate with the media via his Twitter account these days, so we decided to take a look at @juanpelota's feed.

Pelota's Twitter bio? "Grew up idolizing The Big 4. They used to call me Junior. Retired. Raisin' 5 kids. I swim, I bike, I run. I travel. I fight cancer. And I like cold beer."

The roughly 16,500 people who follow @juanpelota on Twitter (compared with more than 2.8 million who follow @Lance Armstrong) listen in as he jokes and jabs with his training buddies, including Austin triathlete James Bonney, Olympic swimmer Aaron Peirsol and former University of Texas swimmer and "Engine 2 Diet" author Rip Esselstyn, usually in a funky mix of Spanish and English.

Pelota has told his Twitter followers that he swims six or seven days a week and trains between three and six hours a day. He's shared with them a photo of his sleek black triathlon bike, with the caption "Sneak peek at my tri rig for 2011. Muy rapido."

With all the chatter, though, @juanpelota has never said publicly when or where he'll race his first triathlon, although he's hinted a lot.

In November, he tweeted the GPS coordinates for Lake Tikitapu in New Zealand, saying it might be the site of his first tri. He later dropped those plans, saying a nagging knee injury was holding him back. "Unfortunately can't make the tri in Rotorua. Dealing (again) with some knee issues and unable to run for now."

He's suggested that he'd like to do an Ironman — with a 2.4-mile swim, 112-mile bike ride and 26.2-mile run, it's the longest and most grueling of all triathlons. But he's backed away from any plans to race at this year's Ford Ironman World Championship in Kona, Hawaii, on Oct. 8.

In late November, he told followers he currently had "no IM plans for kona or any other IM races. Other events on the radar" and tweeted, "Need to walk before I run. Comprende?"

But clearly he's practicing. He drops in frequently to swim with a group in West Austin and has tweeted about swimming in Aspen, Colo., Miami and Kona.

When a Twitter follower asked @juanpelota's goal time for a 2.4-mile swim, the distance of the swim portion of an Ironman triathlon, he said 50 minutes. Last month, he swam 2.4 miles in 49 minutes and 12 seconds, finishing third in an open-water swim race at Lake Travis.

He occasionally doles out triathlon tips to Twitter followers, too, always with a sense of humor.

When someone asked how many margaritas is too many before a triathlon, he said, "Good question. Depends on the person. Best to test in training. For me? 4."

When another asked where an out-of-shape 29-year-old who wants to challenge himself by training for a triathlon begins, he responded, "With your diet." And his advice to a soon-to-be-parent who want to stay active? "A nanny."

He's said that older athletes need more recovery time. He's grumbled about a hard swim at altitude in Aspen, where he lives part time: "Holy mother of God. I forgot what hard swims feel like at 8000 ft." He's joked about older athletes needing all the sleep they can get: "Not to mention guapa (beauty) rest." And said he trains "so I don't become un hombre gordo" (a fat man).
Posted by Recovox at 10:56 PM