Armstrong may roll by bike race in San Jose 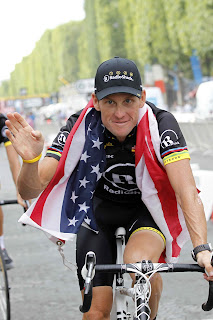 Cycling icon Lance Armstrong won't make an epic climb Wednesday on Sierra Road but he might make an appearance at the Amgen Tour of California.

The seven-time winner of the Tour de France arrived in San Jose on Tuesday night for sponsor meetings but his plans for Stage 4 from Livermore to San Jose weren't known, a cycling source familiar told the Bay Area News Group.

Armstrong, who retired in January, tweeted Tuesday morning: "Run, swim, shower. Taking off for NorCal and the ToC. Go @TeamRadioShack!!"

Stage 4 of the weeklong tour ends Wednesday on Sierra Road with RadioShack's Levi Leipheimer expected to make his first big move of the race that ends Sunday in Thousand Oaks.

Armstrong, 39, had been expected to use the weeklong tour as his farewell to cycling but abruptly retired in January after the Tour Down Under in Australia. He is the target of a federal investigation into use of illegal drugs that aid performance.

Armstrong was embroiled in controversy during last year's Tour of California when former teammate Floyd Landis made detailed accusations of the cyclist's drug use. Landis' statements led to an investigation led by the Bay Area-based agent Jeff Novitzky, who handled the Balco case. The case is being handled by a federal grand jury in Los Angeles.

Versus cycling announcer Phi Liggett was surprised by Armstrong's retirement before the Tour of California.

"It's a rather quiet exit for a man with such a big charisma," he said. "It was leaving the sport by the back door rather than in a blaze of glory for what he achieved in his career."

Jens Voigt of Leopard Trek suffered a left shoulder bruise after falling near the finish in Modesto. Timothy Duggan of Liquigas-Cannondale and Jesus Del Nero Montes of Sunnyvale-based Netapp suffered mild head injuries. Michael Matthews of Rabobank and Andreas Schillinger of Netapp had leg cuts.
Posted by Recovox at 12:07 PM