2011 Tour of California may have Lance Armstrong in spirit only 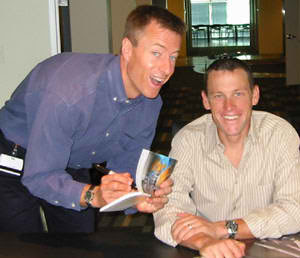 Superstar cyclist Lance Armstrong’s shadow continues to hang over the Amgen Tour of California even though he won’t be taking part in the race. But will he be missed?

Cycling superstar Lance Armstrong was a big draw last year as the Amgen Tour of California raced through Auburn.

From the saga of his stolen bike to his storied support for fellow cancer sufferers, Armstrong was the purveyor of some major buzz as Auburn spectators contented themselves with even just a glance of Lance.

Then there was the continuing question of whether he used performance-enhancing drugs to maintain his almost super-human dominance in the sport of cycling.

This year, though, Armstrong will be nowhere in sight when Auburn plays host to Tuesday’s Third Stage start.

And the predominant feeling is that life without Lance will still be good on race day.

“The bottom line is it’s one of the biggest events in the world and they have plenty of international stars coming,” said Mayor Bill Kirby. “It’ll be sad not to see him but we’ve got Levi Leipheimer and other stars. This is going to be a big showcase for the world to see Auburn.”

Armstrong, a seven-time Tour de France winner whose inspiring comeback from testicular cancer has spawned the Lance Armstrong Foundation, was in the peloton last year, scooting through Auburn on his way with his team from Nevada City to Sacramento.

Jim Northey, a member of the Auburn start’s organizing committee, said he doesn’t anticipate a big impact on the tour from Armstrong’s absence this year.

“There are so many better-quality riders coming to the forefront of cycling,” Northey said. Some of the leading riders taking part include David Zabriskie and Levi Leipheimer, he noted.

“The tour is not built around Lance and I see 20,000 or more people coming to Auburn,” he said. “People are going to see what happens in Europe and they’re going to be happy here. The committee has done nothing but a great job.”

If bike-racing fans stay away, it will have more to do with $4.20-a-gallon gas than no Lance Armstrong, Northey said.

The possibility of Armstrong still showing up in Auburn has been a continuing rumor with some grounding in fact, Northey said.

“It’s just a rumor but he’s got to support his Team Radio Shack in some form,” he added.

Auburn’s Brad Kearns, a retired triathlete who competed against Armstrong in the 1980s, agreed that the Amgen race can stand on its own two wheels, without the high-wattage star power of the biking world’s most recognizable athlete.

“His presence did help raise awareness but it’s grown beyond Lance,” Kearns said. “He put the sport on the map and now it has taken on a life of its own.”

Kearns, active in sports programs in schools, said that it would be a shame if children aren’t given the opportunity Tuesday to see the Amgen tour in Auburn.

“The schools should shut down for an hour or so for students to see the spectacle,” he said. “These guys are the fittest athletes in the world.”

Elizabeth Oliver, who lives in the Downtown Auburn area, said she’s sure Armstrong would be a draw but the event is still going to be a lure. Last year, Oliver didn’t attend the event but was inspired when she viewed a friend’s photos.

Oliver anticipates she’ll make it to the Central Square area for the start time of around 10:15 a.m. Tuesday.

“Even without Lance,” she said. “I like this little town and all the events we seem to put on so well.”
Posted by Recovox at 7:09 AM