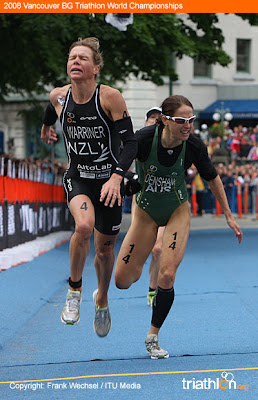 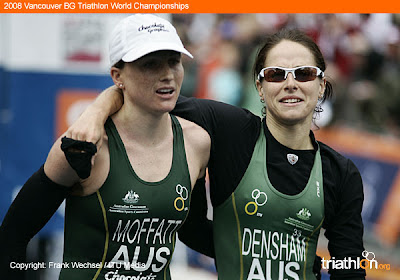 Great Britain’s Helen Tucker pulled off one of the most shocking upsets in recent triathlon history as she became the new triathlon world champion today in Vancouver. It was a thrilling sprint finish between Tucker and American Sarah Haskins down the final stretch. Less than a minute later, the fans were treated to another incredible sprint finish for the bronze with Samantha Warriner edging out Australians Erin Densham and Emma Moffatt. Shockingly defending champion Vanessa Fernandes finished a disappointing 10th place.

The Americans and Brits dominated out of the water holding the first five positions including Beijing hopeful Sarah Haskins and Helen Tucker, recent silver medalist at the Madrid world cup. Heavy pre-race favourite Fernandes exited the water in seventh place 14 seconds down. The crowds erupted as Kirsten Sweetland was the first Canadian out of the water in 14th place, trailing by 23 seconds.

Out onto the testing 40-kilometer bike course that included one substantial hill, six women made up the lead group including Fernandes. However, late in the first lap, Haskins and Tucker decided to break away and rode through after the second lap holding an 18-second lead. Their pair worked well together and increased the lead to a full minute by the midway mark. The first chase pack included Emma Moffatt and Fernandes. Just 13 seconds back was the large second chase group which contained a number of big names such as Laura Bennett, Lisa Norden, Erin Densham, Kate Allen and the powerful Kiwi trio of Andrea Hewitt, Samantha Warriner, and Debbie Tanner. The group also included Canadians Kathy Tremblay and Kirsten Sweetland, both looking for top-8 results for automatic selection to the Olympic team.

On the fifth lap, the second chase group caught up to form one huge chase group of 34 women all in pursuit of the leaders Tucker and Haskins. The second chase pack was more than three minutes behind and included Asian Champion Ai Ueda and Canadians Carolyn Murray and Lauren Groves.

The bike portion was similar to last year with Haskins in a two-woman breakaway. Eventually she was reeled in late in the run by Warriner but she managed to hang on for the silver. This year, Haskins and Tucker continued to hammer it out on the bike, building the lead to 1:40 after the sixth of eight laps, and then to 2:02 with one lap to go. The second chase group also continued to lose time and found itself down by almost four minutes.

Haskins was first out of T2 with Tucker just five seconds back. A full two minutes later is when the next woman, Emma Moffatt, headed out on the flat 10-kilometer run course. Behind Moffatt was a number of strong runners including Warriner, Lisa Norden, Tanner, and Sweetland. Meanwhile Fernandes looked sluggish and was slow through transition to be one of the last in the group to get on the run course.

The two minutes was more than enough for Haskins and Tucker, the only question being who would get gold and who would get bronze. The two ran side by side for nearly the entire ten kilometers until the final turn when Tucker powered ahead to become just the second British woman to win an elite world championship. Haskins took the silver for her first ever world championship medal. Up against strong sprinters Moffatt and Densham, it was the guts of Warriner that proved to be the difference as she nipped Densham at the line in a photo finish. It was Warriner’s first ever world championship medal. The Aussies went 4-5-6 with Abram coming across the line after Moffatt.