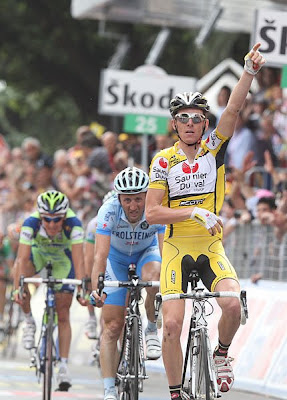 Riccò ─ whose verbal outbursts are almost as lethal as his accelerations in the mountains ─ will take aim at the best young rider’s white jersey during his second Tour appearance.

The 24-year-old Riccò, seen by many in Italy as the heir to deceased Giro and Tour winner Marco Pantani, is considered a longshot for the Tour's yellow jersey.

Also getting a nod is Italian climbing specialist Leonardo Piepoli, who crashed out of the Giro in the Dolomites with three broken ribs and various fractures in his left hand.

Juan José Cobo, 20th overall last year, will be taking aim for the top 10 in his second Tour ride.

“I’ll take aim for the top 10 in the Tour. Last year I was 20th in my first crack at it, so this year, I’m sure things will go even better,” said Cobo, who won the 2007 Vuelta al País Vasco. “I wish there were more climbs in this year’s Tour, but we’ll have to do the best we can. At least there are less time trial kilometers, too.”