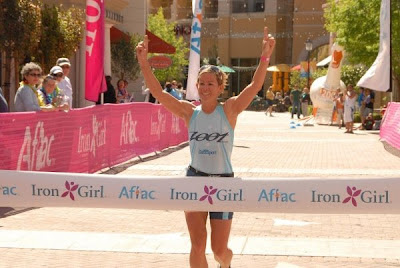 Mirinda Carfrae started her triathlon career with great success at the Olympic distance, scoring silver medals at the Olympic-distance Under-23 world championships in 2002 and 2003 and earning a silver medal at the 2003 Salford World Cup. But in 2004, she earned a breakthrough win at the 2004 Nice long-course triathlon and won a silver medal at the 2005 International Triathlon Union long-course world championship. In 2006, she took two wins at the Ironman 70.3 distance and a third at the Ironman 70.3 Worlds in Clearwater. In 2007, Carfrae scorched the field to win the Ironman 70.3 Worlds and started 2008 strong with wins at the Geelong and St. Croix 70.3 races.

Riding a wave of success, people in the sport are wondering when Carfrae will follow in the footsteps of her friendly rival Samantha McGlone and tackle Ironman Hawaii. In this Q&A, Carfrae discusses her path from a childhood on family farm in Queensland to a life as one of the premier triathletes in the world.

Click on title link to read the interview.
Posted by Recovox at 9:47 AM