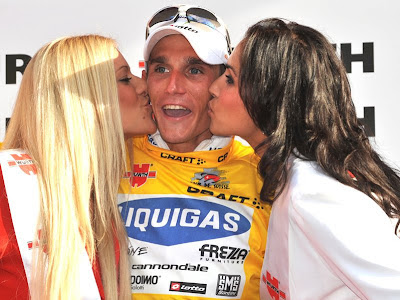 Czech rider Roman Kreuziger of the Liquigas team won the 72nd Tour of Switzerland in Berne on Sunday, despite losing out to Switzerland's Fabian Cancellara in the ninth and final stage.

The 22-year-old - the youngest winner of the Swiss tour - earned his first Pro Tour victory after an impressive showing, which included seizing the yellow jersey from Kim Kirchen during Saturday's 25km time-trial. Kreuziger finished 49 seconds in front of Andreas Klöden, of the Astana team, and nearly two minutes ahead Spanish climber Igor Anton, of Euskaltel.

"I have the feeling that this the beginning of my professional career. It is by far the most important success since my junior world champion road title in 2004," said the Czech. "My goal was to get to the Tour de France in good shape, but during the Tour of Switzerland I felt that I was already in good form. Perhaps I'm a little bit in advance of myself.

"I'm going (on the Tour de France) to really learn. I'm going to France to see what happens and get the experience."

It was a case of role-reversal for the first two over the line, after the young Czech finished behind Klöden in the Tour of Romandy earlier this year. But the German - today celebrating his 33rd birthday - was happy with his second placing, praising the quality of Kreuziger over the nine difficult stages.

"After my illness in the Giro d'Italia, I started this race without real preparation. The bad weather in the first days did not help me, but I survived," said Klöden, who placed third in the 2006 Tour de France. "Twice I lost about twenty seconds. It could have made the difference, but I won't complain. Kreuziger is a big talent."

Berne-born Cancellara won his second stage of the Tour, after taking Friday's Lyss stage, and the Swiss star was content with his performance.

"I have not taken a decision over dropping out of the Tour (de France) to better prepare for the Olympic Games. I will take it day by day. Anyway, I'm happy with my performance," he said.

The stage was lit up by a 130km breakaway by five riders, including Spain's Francisco Perez Sanchez (Caisse d'Epargne) and Holland's Maarten Tjallingii (Silence), but Cancellara's climbing skills ensured he finished first.
Posted by Recovox at 8:41 PM