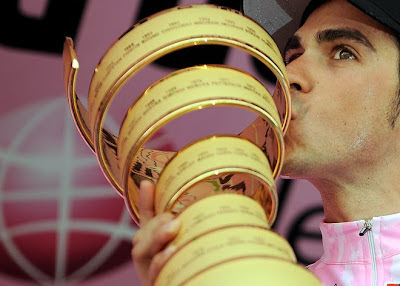 Spaniard Alberto Contador, 2007 Tour de France champion, has become the first foreigner to win the Giro d'Italia in 12 years. He was able to hold the gaps he gained in the Urbino time trial nearly two weeks prior over the Dolomites and Alps to close out the Italian three-week race over Italian Riccardo Riccò (Saunier Duval-Scott) and Italian Marzio Bruseghin (Lampre).

Team High Road ruled the final day's 28.5 kilometres time trial, placing two of its men in the top spots. Italian Time Trial Champion Marco Pinotti maintained the best time of the day – 32'45" – after knocking out his team-mate, Germany's Tony Martin, by seven seconds. Third for the day went to Russia's Mikhail Ignatiev (Tinkoff Credit Systems) at ten seconds.
Posted by Recovox at 9:22 AM